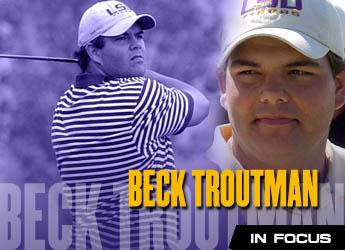 With a tap-in putt and tip-of-the-cap to an applauding gallery surrounding the 18th green of the University Club, LSU freshman Beck Troutman captured the first tournament title of his young career as a college golfer.

He won the 2005 LSU Spring Invitational on April 3 by two shots with a three-round total of 5-under par 211, including a career best 3-under 69 in the second round. He followed that effort with a 2-under 70 in the final round to win the tournament.

“I knew I was going to win that golf tournament when I teed it up on the third day,” Troutman said. “I was relaxed and felt confident about winning the golf tournament. When I made the putt on 18, it was awesome. It’s a once in a lifetime experience winning your first college tournament, especially as a freshman. I loved it.”

What made the event even more special for Troutman was the fact that he was able to share in the moment with his family. His parents, Bob and Lynn Troutman, drove approximately 100 miles from their home in Fernwood, Miss., to watch their son play.

“My parents have watched me play golf my entire life,” Troutman said. “My mom has been to pretty much every golf tournament I have ever been to, and she has seen all of the success I have had. To have her and my dad there when I won my first college tournament was unbelievable. It was great to share that moment with them.”

Although they have supported their son throughout his life in the junior ranks and now in college, Troutman says his parents have never pressured him to play and compete in the game he loves.

“A lot of good golfers are those whose parents have a lot to do with golf. Their parents usually pressure them a lot, and that’s something I’m very fortunate not to have,” Troutman said. “My parents never put added pressure on me, which is something that has helped me grow as a golfer and kept the game fun for me.”

Troutman has felt his family’s support ever since he picked up a club for the first time as a 5-year-old. He and his grandfather, Frank Stickney, would spend many afternoons together playing at Fernwood Country Club near his home. He recalls many fond memories putting around on the practice greens and walking the rolling fairways of the course with his grandfather.

“Not many people in my family play golf, but my grandfather played golf his entire life,” Troutman said. “He passed away when I was about 8, but he would take me out to play with him when I was little and I really liked it. We always had a good time.”

Troutman dedicated himself to learning the game as an 8-year-old and quickly became one of the premier junior golfers in the state of Mississippi. He joined the Gulf States Junior Tour as a 10-year-old and participated in many tournaments in Mississippi and Louisiana.

“That’s a great beginning level of junior golf,” Troutman said. “I started out there, played well and won quite a few tournaments. I got comfortable with it and used the Gulf States Tour to prepare myself for playing at a higher level of junior golf.”

As a high school student at Parklane Academy in McComb, Miss., Troutman was actively involved in the American Junior Golf Association, which is the premier junior golf organization in the country. It sponsors tournaments across the country and prepares many of the nation’s top junior players for competition at the collegiate level.

Troutman played in tournaments in such places as Florida, Georgia, Louisiana and Arizona on the AJGA circuit and even won the HP Classic at English Turn Golf and Country Club in New Orleans. He believes this experience helped prepare him for the competition he would face as a freshman in college.

“It took me a while to get comfortable in the AJGA because the competition level is so great,” Troutman said. “The best thing that could have prepared me for college golf is playing in the AJGA. You just don’t see that kind of competition playing high school golf.”

On the strength of his performance on the AJGA circuit and winning such tournaments as the Southern Junior Amateur and Future Masters, Troutman began to attract the attention of some of the nation’s premier college golf programs. Auburn, Ole Miss, Mississippi State, Texas A&M and Tulane are just a few of the schools that had interest in signing Troutman.

However, he knew immediately following his official visit to LSU and meeting head coach Greg Jones that he wanted to become a Tiger.

“I took one visit, and that was to LSU,” Troutman said. “I knew I was going to LSU because the facilities, the education, the academic center and the atmosphere are unbelievable. My teammates are great guys and I already knew a few of them, which made me feel comfortable.

“But a major factor that got me here is coach Jones. He’s a great coach, and I’ve never had a golf coach like him before. I believe he’s the best there is to offer.”

In fact, Troutman says that he never really had a true teacher of the game before playing for Jones.

“He’s got so much information and he knows so much stuff about golf that he is able to prepare us so well for tournaments,” Troutman said. “He has a lot of experience and can answer any question we may have. I love to just sit and talk to him about what he knows.

“He teaches us how to practice and what to practice. He is great about picking out spots in our game to focus on so we can become better players. All of these things help prepare me and my teammates to play in tournaments and prepare for competition.”

Troutman has certainly taken these lessons and applied them to his game in his freshman season.

He has played in nine tournaments for the Tigers this season with a 73.92 stroke average in 27 rounds of competition, including 11 rounds at par or better. He has also earned two top-20 finishes to go along with his win in the Spring Invitational and ranks as one of the top freshmen in the SEC.

Although he says it would be a dream come true to be recognized as one of the top golfers in the conference in the coming years, his focus is on becoming a better player and taking his game to the next level.

“I’m very fortunate to be able to play because I knew coming in as a freshman I would have to prove myself,” Troutman said. “This is a completely different experience playing with my teammates, bonding with them and knowing this is our team.

“Going to these golf tournaments is also a different experience. I always finished in the top 20 when I played in the AJGA, but when you play in a tournament with 80 players and you finish in the last 20, it’s a reality check. I knew I would have to take my game to the next level, and I think I have.”

It is obvious when talking with Troutman that he does not lack confidence in his ability on the golf course, and he is certainly confident that he can help lead the LSU program back to the top of the SEC and the nation during his career in Baton Rouge.

Although he has set a high standard for himself while in college and aspires to pursue a career as a golfer after graduation, Troutman believes it is important to leave LSU with a degree and prepare himself to meet whatever challenges he may face.

As a business major, Troutman plans to pursue a career in business management if his dreams of playing on the PGA Tour does not come to fruition.

“Being associated with golf and playing with a lot of older people, I’ve been able to meet people and create a lot of business ties,” Troutman said. “Golf opens a lot of doors that you get to know a lot of people in the business world through that.

“I love being around people and working with people, and pursuing a career in business suits me well.”

No matter what direction Troutman’s golfing career may take, he knows LSU will prepare him for what lies ahead. Whether it’s as a professional making millions on the PGA Tour or simply playing with new business associates, there’s no place he would rather pursue his dreams than at LSU.

“It’s LSU. It’s the greatest place to be,” Troutman said. “I couldn’t imagine myself playing anywhere else. This place has everything there is to offer, and I couldn’t be happier. I will certainly remember my time here and what I’m able to accomplish as long as I live.”