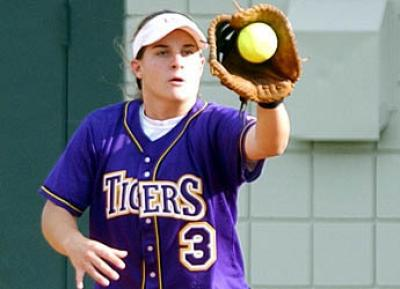 Hill earned the all-tournament honor after pacing the Tigers at the plate. The Harahan native went 4-for-10 (.400) with two home runs, two runs scored and five RBIs for a 1.000 slugging percentage. She also drew an intentional walk while going errorless in 14 chances in the field.

The Tigers finish the season at 31-23 overall, including four wins over nationally ranked teams and four wins over teams that were receiving votes in the poll. LSU advanced to the quarterfinal round of the SEC Tournament during the weekend before falling to No. 18 Auburn, 4-3, on Saturday afternoon.

Over the last 16 games, the Tigers posted an 8-8 record despite playing their final 12 games against nationally ranked teams, including four ranked in the top 10. Of LSU’s final eight losses, the Tigers dropped five of them by two runs or less, including two in the SEC Tournament by one run and two in extra innings a week earlier. In that span, LSU also recorded four wins over the Gators, including one by run-rule, and three over Ole Miss, which was receiving votes at the time.

It marks the first time since 1997 that the Tigers have failed to earn a bid in the NCAA Tournament. Without a senior on the 17-player roster, that included nine freshmen, LSU will return its entire team in 2006 with the addition of Florida All-State selection Dani Hofer of nationally ranked Palm Harbor High School and Louisiana All-State selection Fallon Fisher of Sulphur.