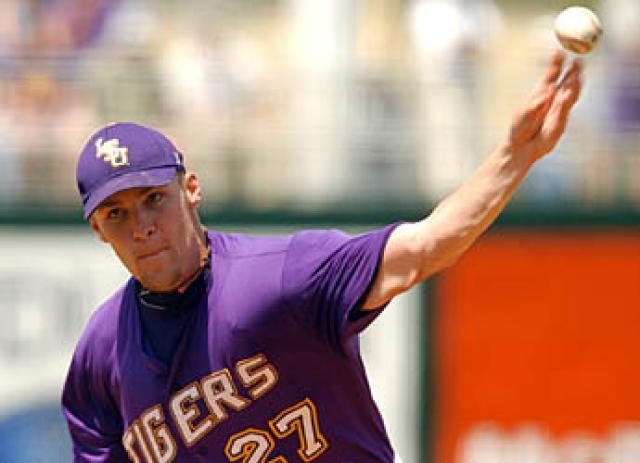 The Tigers (35-17, 16-11 SEC) moved into first place in the Western Division standings following Alabama’s 3-2 loss to Arkansas Sunday. LSU leads the Crimson Tide (15-12) by one game in the division race.

The Vols, who entered the weekend atop the league standings, fell to 36-16 overall and 16-10 in the SEC.? Florida (18-9)holds first place in the SEC East and the overall standings after completing a three-game sweep against Mississippi State.

LSU wraps up its midweek schedule at the University of New Orleans on Wednesday. First pitch from Maestri Field is scheduled for 6:30 p.m. Right-hander Chase Dardar will draw the starting nod in his first appearance since March 29, when he also faced UNO.

For the second straight day, the Tiger bats erupted for double-digit hits and chased a Tennessee starter early. Freshman James Adkins (7-3) did not make it out of the second inning and was roughed up for seven runs on five hits.

Outfielder Ryan Patterson went 1-for-2 on the day with a homer, two runs scored and two RBI and finished the weekend 7-for-11. Third baseman Chris Jackson added two hits and three runs, while right fielder Nick Stavinoha extended his hitting streak to 11 games with a two-run homer and a single.

Junior Greg Smith (9-2) worked six solid innings to pick up his fifth straight win. The southpaw limited the league’s leading hitting team to six hits and no runs. Smith has only surrendered four runs in his last five starts.

“It’s definitely easier to pitch with a big lead,” said Smith, who walked one and struck out four. “You can be more relaxed but against Tennessee you know you are going to have to do a good job out there. Throwing strikes and getting ahead of the hitters helps too.”

Smith was staked to a 12-0 lead after three innings of play, in large part to an eight-run outburst by the Tiger bats in the second.

Quinn Stewart started the second-inning assault with a leadoff single followed by the next six batters who reached base. Jackson drove in the first run of the frame with a single, and Jordan Mayer lined a two-run double into the left field corner. Liuzza capped the barrage with the first of two doubles off of reliever Sean Watson.

“It took a while for it to show up but it did,” said head coach Smoke Laval. “We had hard base hits, ground balls and had the count in our favor. We chained some great at-bats together. That is a good sign.”

The eight runs in the frame were the most scored by LSU in an SEC game since posting a nine-run first inning versus Mississippi State in the semifinals of the SEC Tournament on May 24, 2003.

Patterson wasted little time in getting the Tigers on the board in the first. Facing an 0-2 count with one on and one out, the senior hammered a two-run homer over the left field bleachers — his second in as many games and his sixth consecutive hit.

Stavinoha connected on his 16th homer of the season with two outs in the third.?

LSU increased the advantage to 13-0 in the fifth on one of three Tennessee errors. Pinch hitter Bryan Harris recorded his first hit since Feb. 20 with a RBI single in the sixth.

Smith left after the sixth, giving an opportunity to several pitchers to get some quality innings in. Brandon Nall, Justin Meier and Chris Cahill worked the final three frames.

The Tigers’ shutout bid was dashed in the eighth as the Vols plated four runs on Meier highlighted by a two-run double from Kelly Edmundson.?

Cahill, making his first appearance since April 6 versus Rice, retired three of the four batters he faced in the ninth and tallied two strikeouts.??

“It’s good to get some guys some work,” said Laval. “They can bounce back in two more days against UNO and pitch again. We still have to get (Edgar) Ramirez and (Eric) English some work in.”

Adkins faced 5 batters in the 2nd.