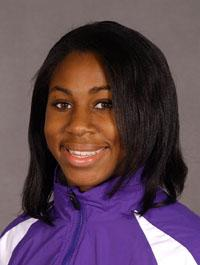 NASHVILLE, Tenn. – Lady Tiger sophomore Tina Harris was unfazed by thunderstorms that halted competition for over four hours Saturday afternoon at Vanderbilt track as she went on to earn all-conference honors in the long jump at the SEC Outdoor Championships.

Harris completed her three preliminary round jumps before rain suspended the competition. After the delay, the All-American returned to the runway where she jumped a personal best and stadium record 21-4 3/4 on her second attempt to earn runner-up honors.

The mark, which moved her into sixth on the Lady Tigers’ all-time performance list, was bettered only by Tennessee’s Tianna Madison who the conference title with a world-leading leap of 22-8 1/2.

“The thing that impressed me the most about Tina was that she was in third before the break and then she came back and was one of the few jumpers that actually improved,” said LSU head coach Dennis Shaver. “She is consistently jumping a long way it just happens that we have one of the best jumpers in the United States in our conference.”

Also earning all-conference honors for the women’s team was Shontae Harris. The Natchitoches, La., native cleared 5-7 in the high jump to finish tied for second with Mississippi State’s Jasmine Wall. The conference finish marked the best of the senior’s career.

Fellow seniors Matt Vincent and Katie McKeever also tallied points towards the team totals in the discus as Vincent finished fifth on the men’s side (171-9) and McKeever placed sixth for the women (157-6).

In the qualifying rounds, the Lady Tigers turned in another successful day of competition, advancing six athletes into tomorrow’s finals. The Tigers had three move on.

“I think the people that we expected to advance did that,” said Shaver. “The bottom line is everyone has position themselves for an opportunity to win their event.”

LSU will comprise over one third of the women’s 100-meter hurdles final as three of the eight will be donning the purple and gold. Freshmen Jessica Ohanaja (13.42) and Angel Boyd (13.614) each earned automatic bids after finishing second in their respective heats with seasonal best times. Senior RaNysha LeBlanc advanced on time also finishing in 13.618.

The Lady Tigers will also have two in the 100 meter final as freshmen Kelly Baptiste and Ashley Owens both won their qualifying round heats in 11.46 and 11.47, respectively.

In addition, LSU will have one representative in both the men’s and women’s 400 meters. All-American Kelly Willie will get the chance to defend his open quarter title after easily winning his first round heat in 45.92.

Freshman Deonna Lawrence posted a seasonal best 53.17 to win her heat and earn the automatic bid.

Also advancing to the final day of competition were Tigers Patrick Gavin and Andrew Huston and Lady Tiger Ruth Nanyinza in the 1,500 meters. Gavin automatically qualified with a time of 3:47.51, while Huston clocked a personal-best 4:31.11 to move on based on time. Nanyinza crossed the line in 4:31.11 to also advance on time.

Action from the SEC Championships wraps up tomorrow with the crowning of the men’s and women’s team champions. Competition is slated to get underway at 1 p.m.