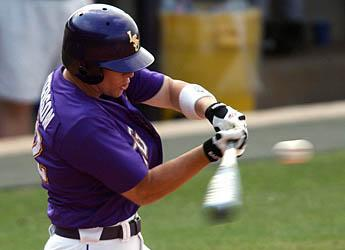 BATON ROUGE — Left fielder Ryan Patterson tied a school record with five hits on Senior Day and Clay Dirks hurled his third complete game of the season as No. 11 LSU evened its Southeastern Conference series with ninth-ranked Tennessee by a score of 9-3 on Saturday at Alex Box Stadium.

LSU will send junior left-hander Greg Smith (8-2, 2.31) to the mound on Sunday in the rubber game, which is now scheduled for 11:30 a.m. The contest has been moved up 30 minutes due to Tennessee’s travel plans. The Vols will counter with freshman lefty James Adkins (7-2, 2.66).

Eleven senior players were honored before the game, including Patterson, who made his second-to-last regular season game at Alex Box a memorable one.

“With me coming back this year, I was really excited about Senior Day,” said the Rowlett, Texas native. “It lived up to everything I expected it to. It was good to have my family out on the field and I am sure the other guys feel the same way.”

Patterson, a National Player of the Year candidate, became the 29th player in school history to collect five hits in a game and the first since Jon Zeringue’s five-hit contest nearly a year ago to the day. Zeringue pounded out five hits in a 7-6 win versus Vanderbilt on May 15 last season.

Patterson, who also tied a career-high with four runs scored, homered for the 18th time this season and drove in three runs.

“We understood how (Luke) Hochevar really was,” said Patterson. “We tried to forget about last night’s game and come out here and focus on the new pitcher. We were confident that we could swing the bats well.”

The Tigers finished the game with a 15 hits, including four from second baseman Clay Harris, who added three RBI.? Designated hitter Jordan Mayer went 2-for-5 with two RBI.?

Meanwhile, Dirks (10-2) cruised to his 10th win of the season, limiting the Vols to three runs while scattering 10 hits in nine innings. He fired an economical 103 pitches, walked none and struck out five.

“I threw majority fastballs for strikes, worked both sides of the plate and kept the ball down,” said Dirks. “Most of the time you are going to win when that happens. Any pitcher can work with nine runs scored. We came out with a lot of intensity today.”

The Tigers staked to a 4-0 lead after three innings of play on two hits apiece by Patterson and Clay Harris in the first and third. Both had RBI singles in the first inning and then connected on RBI hits in the third.

A three-run fifth gave LSU a comfortable 7-0 advantage highlighted by another RBI single from Harris, a run-scoring double from Mayer and an opposite field single by Chris Jackson.

Patterson belted his solo homer in the eighth, crushing reliever Chris Howell’s offering deep over the left field seats. Mayer accounted for? the final margin with another solo shot in the eighth, his third homer of the season.

Cobb faced 4 batters in the 5th.