Tigers Advance to NCAA Sweet 16 with Win Over Tulane 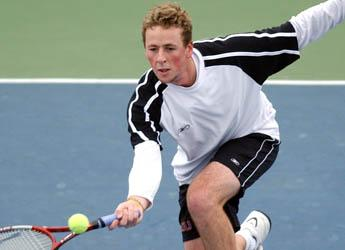 BATON ROUGE — The LSU men’s tennis team is headed to the NCAA Sweet Sixteen for the first time since 2001 after beating Tulane, 4-1, in the second round match Saturday.

Junior Mark Growcott clinched the match for the 10th-ranked Tigers (21-8, 5-6) with a three-set win on court on over Tulane’s Dmitry Koch.

“Going into the match, Mark had been struggling,” Brown said. “He lost to the same player in straight sets the last time we played Tulane. For him to hang in there was nothing less than huge.”

No. 11-seed LSU has not been to the Sweet Sixteen with any members of the current squad. But the Tigers’ 21st victory gives them the second-highest win total of any team head coach Jeff Brown has coached in his eight seasons here.

“It’s special for the two seniors,” Brown said. “I was hoping they wouldn’t be the only group never to have gone that far.”

Doubles was a strong point again for LSU as the Tigers captured the first point for the 14th consecutive match.

Danny Bryan and Colt Gaston cruised to a 8-3 win over Ted Angelinos and Jacobo Hernandez on court two. The Tiger pair has not lost a doubles match yet this season in dual play.

With the win, Skupski and Growcott are 30-8 on the season. With their next victory they can tie for the all-time LSU record for doubles wins in a season.

“It obviously took a total team effort to find our four points,” Brown said. “Tulane fought like crazy. I give them credit considering how hard they played yesterday.

Tulane got to the second round by beating Louisiana-Lafayette, 4-3 on Friday. LSU beat Binghamton, 4-0 earlier that day.

It was the Tigers’ second win of the season over rival Tulane. They beat the Green Wave, 6-1 in April and will end the season with a perfect record against in-state opponents.

LSU will face the winner of the regional hosted by Georgia. Georgia is the top seed in that regional, but they will not play the second round until Sunday.