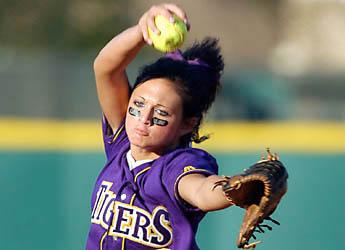 GAINESVILLE, Fla. — Rallying from four back to cut the Auburn lead to one, the LSU softball team could not complete the comeback effort as the Fighting Tigers fell, 4-3, in the Southeastern Conference Tournament on Saturday afternoon at the Florida Softball Field.

With the loss, LSU (31-23) was eliminated from tournament play, while 18th-ranked Auburn (49-15) continues on to play Georgia on Saturday night at 6:30 p.m. (CT). The Fighting Tigers will now wait to learn if they have earned a bid in the NCAA Tournament on Sunday at 6:30 p.m. on ESPNnews.

“We stress all the time that everything counts,” said LSU head coach Yvette Girouard. “All the little things that you don’t do can come back and catch you and they added up against us today. I was proud of the way the team fought back, but we ended up hurting ourselves.”

Auburn took a 1-0 lead in the third inning on the first hit of the game, knocking in a runner that had reached on a walk. AU added three more runs in the top of the sixth, aided by an LSU error. After leaving runners in scoring position in four of the first five innings, including the bases loaded in the fifth, the Fighting Tigers finally came though with three runs in the bottom of the sixth.

“We had all the right people up at the right time and we could not come through,” said Girouard. “It is sometimes a game of inches and the inches did not go in our favor today.”

Emily Turner took the complete-game loss to fall to 17-16 on the season. Despite allowing just six hits, she gave up four runs, three earned, with a walk and eight strikeouts.

“Emily was masterful all weekend,” said Girouard. “No one can say that LSU pitching is the weak link anymore. She proved herself in this tournament.”

Auburn took the lead in the top of the third inning. Turner walked the lead off batter, Anne Norton. With Lauren Walton pinch running for Norton, she moved to second on a sacrifice bunt. With two outs, Kristina McCain recorded the first hit of the game, sending one through the right side. Walton slid into home just ahead of the tag by Kristen Hobbs to give AU the 1-0 lead.

In the top of the sixth, Auburn added three more runs. A pair of infield singles and a sacrifice bunt put runners on the corners. Holly Currie then doubled to right center, scoring Amy Shaw from third. On the play, an errant throw from Vanessa Soto to the plate allowed Ashley Griffin to score from third and Currie to take third. Sara Dean then hit a sacrifice fly to deep center field, scoring Currie for the 4-0 advantage.

“We gave them a run on a throw to the plate that we did not have to make,” said Girouard. “Then we lost by one run.”

In the bottom half of the inning, LSU responded with three runs of its own. With one out Lauren Delahoussaye drew a walk. Back-to-back singles by Quinlan Duhon and Erika Sluss, and a pair of errors by the Auburn right fielder, scored Delahoussaye and put runners on second and third. A single up the middle by Camille Harris scored both runners to cut the AU lead to 4-3.

After retiring Auburn in order in the top of the seventh, LSU had one final chance in the bottom of the inning. The Fighting Tigers hit the ball hard in three straight at-bats, but unfortunately could not get one to fall as LSU went down in order to end the game.

Holly Currie earned the win to improve to 24-9 on the season. She allowed two runs on three hits with four walks and six strikeouts in five and a third innings. Beth DiPietro came on in relief and allowed one unearned run on two hits with a strikeout in an inning and two-thirds to record her fourth save of the year.