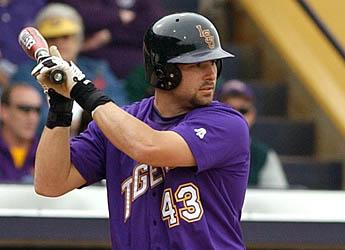 BATON ROUGE — The 11th-ranked LSU baseball team jumped out to an early 2-0 lead on a first inning home run by right fielder Nick Stavinoha but managed little else against Tennessee ace Luke Hochevar, dropping the series opener to the ninth-ranked Volunteers, 9-2, on Friday night at Alex Box Stadium.

The Tigers (33-17, 14-11), who fell to 3-6 on the season in SEC series openers, remained tied with Alabama for first place in the SEC Western Division. The Crimson Tide lost their series opener to Arkansas by a score of 5-4. The Volunteers (36-14, 16-8) held on to their half-game lead over Florida in the overall SEC race.

Sophomore left-hander Clay Dirks (9-2, 3.13) will look for a crucial win in Game 2 of the series at 3 p.m. Saturday, while Tennessee will counter with sophomore right-hander Craig Cobb (5-2, 4.19). The game will be the televised live by Fox Sports Net.

Eleven Tiger seniors will be honored before the game as Senior Day festivities begin at 2:45.

“They hit the ball and found holes and just kept hitting,” Mestepey said. “I fell behind on a few batters, but they just put the ball in play. It happens. That’s baseball. You just have to get over that and come out tomorrow focused and ready to play.”

Stavinoha led LSU at the plate with a 1-for-4 performance, including a home run and two RBI, and extended his hitting streak to a team-leading nine games. Shortstop Derek Hebert was 2-for-4 with a double, while designated hitter Jordan Mayer was also 1-for-4 in the game and extended his hitting streak to seven games with a single in the ninth inning.

Third baseman Chris Jackson opened the bottom of the first inning for the Tigers with a single to right field and Stavinoha followed three batters later with a two-out, two-run homer that just cleared the wall in left field.

This marked only the ninth SEC game in which the Tigers scored first, but the lead would not hold.

Tennessee cut the LSU lead in half with a run in the third inning on an RBI single to left field by third baseman Chase Headley and tied the game in fifth when right fielder Eli Iorg scored from third base with one out on a wild pitch from Mestepey.

The Volunteers broke the game open in the sixth inning by sending 10 men to the plate, scoring five runs on six hits to take a 7-2 lead.

Shortstop Eric King opened the inning with a single to center field and was sacrificed to second base by left fielder Julio Borbon. After second baseman Michael Rivera reached on an error, designated hitter Kelly Edmundson ripped a single to left to drive in King and give Tennessee the lead.

First baseman Alex Suarez followed with an RBI double to left field to drive in Rivera and scored three batters later on another RBI single by Headley. Center fielder Josh Alley and catcher J.P. Arencibia each added RBI singles in the inning.

Tennessee tacked on two runs in the ninth inning off of reliever Jordan Faircloth to extend its lead to 9-2.

Hochevar faced 2 batters in the 9th.