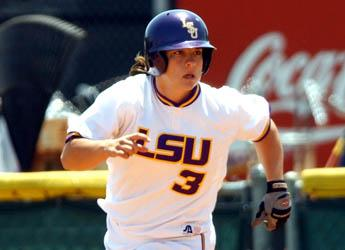 GAINESVILLE, Fla. — The LSU softball team scored six runs in the top of the fifth inning on the way to run-ruling No. 23 Florida, 9-1 in six innings, at the Florida Softball Field and advance in the Southeastern Conference Tournament.

With the win, the Tigers (31-22) move on to face the loser of the Alabama-Auburn game on Saturday at 12:30 p.m. (CT). The loss eliminated the Gators (41-21) from the SEC Tournament. LSU swept four meetings with Florida this season, all in Gainesville, outscoring the Gators, 24-4, on the year.

“This was the best year we have ever had against Florida,” said LSU head coach Yvette Girouard. “We always seem to struggle in Gainesville, but we had a great year here against the Gators.”

“Florida seems to be in the same funk that we went through at the beginning of the year,” said Girouard. “I’ve seen that deer in the headlights look this season and I’m glad that I didn’t see it in our eyes today. We are going to have the same team again next year so we had to stop and look at each other and say that we had to fix our problems and we are playing better.”

Emily Turner earned the complete-game win to 17-15 on the year. She allowed one run on six hits with four strikeouts. She is now five strikeouts from reaching 200 strikeouts on the season.

Three Tigers posted multiple-hit games on the day, led by a 2-for-4 performance by Hill. She tied her season high with four RBIs while also scoring a run on the home run. Lauren Delahoussaye also went 2-for-4 with a run scored, while Lauren Castle went 2-for-3 with two runs scored. Quinlan Duhon recorded the only other RBI of the game for LSU, posting a 1-for-2 performance with an RBI and a run scored.

In the top of the second, LSU led off with a double to left center by Leslie Klein. The Tigers could not put anything together after the hit and Klein was stranded on second.

With one out in the bottom half of the inning, Mandy Schuerman recorded a double for Florida. She was then thrown out going to third on a fielder’s choice by Lindsay Howard. After Howard stole second, Mary Ratliff grounded out at first to end the inning.

LSU came back in the top of the third and put runners in scoring position once again. With one out, Killian Roessner recorded an infield single. With Lauren Uhle pinch running for Roessner, Uhle stole second. A walk by Camille Harris put runners on first and second. Uhle was then caught stealing on a double steal attempt as Harris moved to second. Lauren Castle then grounded out to third to end the inning.

With two outs in the top of the fourth, the Tigers put together three consecutive hits to plate the first run of the game. Vanessa Soto recorded an infield single deep in the hole at second base. A single up the middle by Lauren Delahoussaye put runners on first and second. With Heidi Robin running for Soto at second, an RBI single to left field by Quinlan Duhon scored Robin to give LSU the 1-0 advantage.

The Tigers broke the game open in the top of the fifth with six runs with two outs. Castle singled to left field. Hill then recorded her second home run in two games as she nailed a 1-1 pitch over the left center field wall to extend the lead to 3-0 in favor of LSU.

An intentional walk to Duhon loaded the bases. On a slow roller to third base, Lindsay Norfleet over threw first base, clearing the bases as Smith moved to third on the play and gave the Tigers the 7-0 lead.

LSU kept the pressure up again in the sixth inning. Camille Harris led off with an infield single. On a sacrifice bunt attempt by Castle, the catcher overthrew first, allowing Harris to advance to third and Castle to move to second. A single up the middle by Hill scored both runners to extend the lead to 9-0.

In the bottom half of the inning, Florida led off with a double by Lindsey Cameron. With one out, Kristen Butler was hit by a pitch to put runners on first and second. A single by Schuerman loaded the bases.

On a fielder’s choice play, on what appeared to be a pop fly out by Soto at second, Butler was thrown out going back to second for what appeared to be a double play. Instead the ball was ruled to have touched the ground on the fly and Schuerman was out at second on the force to extend the inning as Cameron scored on the play. Ratliff then grounded out to end the game.

Schuerman started and took the loss for the Gators to fall to 12-7 on the season. She allowed one run on six hits with a walk in three and two-thirds innings. Stacey Stevens came on in relief in the fourth and allowed six runs, two earned, on three this with a walk in an innings. Amanda Knowles closed out the game, allowing two runs, one earned, on two hits in an inning and a third.