Tigers Move On With Win Over Binghamton 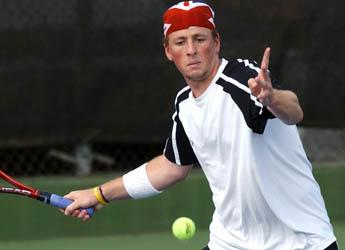 BATON ROUGE —  No.10-ranked LSU advanced to the second round of the NCAA Championships on Friday with a 4-0 win over Binghamton in the first round.

With the win, the Tigers (20-8) hit the 20-win mark for the first time since the 2000 season and the fourth time in head coach Jeff Brown‘s career.

LSU plays the winner of the Friday afternoon match between 20th-ranked Tulane and Louisiana-Lafayette on Saturday at noon.

Only one other Brown-coached LSU team has won 21 matches.

The 11th-seeded Tigers captured their 13th consecutive doubles point with wins on courts one and two. The sixth-ranked team of Mark Growcott and Ken Skupski beat Dan Hanegby and Faisal Mohamed, 8-3 on court one.

Danny Bryan and Colt Gaston kept their dual match record perfect, clinching the point for the Tigers with an 8-4 win over Alex Dobrin and Brian O’Connor on court two.

The court three match between LSU’s Paul White and Kevin Dessauer and Binghamton’s Richemn Mourad and Edwin Gerard was suspended when LSU clinched the doubles point.

Bryan was the first to come off the courts quickly, beating Mohamed, 6-3, 6-0. Dessauer stepped into LSU’s singles lineup on court five and beat Gerard, 6-1, 6-0.

Richman clinched the singles point and the match by defeating Alex Dobrin, 6-0, 6-3

“Binghamton brought a good team,” Brown said.  “It was helpful to us that they were good. We won’t have to raise our level that much tomorrow.”

Binghamton head coach Michael Starke was not disappointed in his team.

“We didn’t lose because we didn’t play well, we lost against a better team,” Starke said.

LSU beat both those teams earlier in the season. They topped ULL, 6-1 in February and beat Tulane, 6-1 in April. The Tigers have not lost to an in-state team this season.

The winner of Saturday’s match moves on to the NCAA Sweet 16 in College Station, Texas. The last time an LSU team made it that far was the 2001 season.