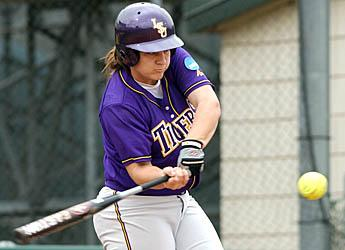 GAINESVILLE, Fla. –Despite a towering home run by Stephanie Hill and continued excellent pitching by Emily Turner, the LSU softball team fell to No. 8 Georgia, 2-1, on Thursday night at the Florida Softball Field in the first round of the Southeastern Conference Tournament.

Despite becoming the only underdog team to score on the day, the eighth-seeded Tigers (30-22) will now face elimination against fifth-seeded Florida on Friday at 12:30 p.m. (CT). The top-seeded Bulldogs advance to play fourth-seeded Tennessee, which defeated the Gators, 4-0, on Thursday. LSU swept Florida in a three-game series in Gainesville two weeks ago.

“We’ve had to deal with adversity all year,” LSU head coach Yvette Girouard said about coming back from a tough loss to face elimination tomorrow. “We’ll ask them to do the best they can and hopefully the breaks will go our way and the bats will come alive.”

A two-run RBI single by Courtney Knight in the bottom of the second inning proved to be the game winner. The Tigers recorded just one hit in the game, but made it count as Hill slammed the ball over the left field fence in the top of the fourth. Unfortunately, LSU could not swing the momentum their way after that hit as a rally came up a run short.

“We haven’t really swung our swing in the last few weeks and it caught up with us again tonight,” said Girouard. “I’m sure Michelle Green did make some good pitches and the credit goes to Georgia. They put a lot of pressure on us.

Turner started and took the complete-game loss for the Tigers to fall to 16-15 on the season. She allowed two run on seven hits with two walks and four strikeouts.

“Emily made some big pitches when she had to,” said Girouard. “Yes, we only had one hit, but we get beat by one hit sometimes. Offensively, we’re just not putting a lot of pressure on people. It’s tough to beat the elite team in the SEC right now, the Georgia Bulldogs, like that.”

Green earned the win for Georgia to improve to 23-3 on the year. She allowed one run on one hit with eight strikeouts in six innings. Kassi Carroll came on in relief in the seventh to earn her sixth save of the year. She retired all three batters she faced and recorded one strikeout.

With one out in the top of the second inning, the Tigers nearly got on the board. Sophomore Leslie Klein nailed a ball to deep center field that appeared may have the distance to clear the fence, but Kelsey Todd went up and robbed the home run with a leaping grab.

“They made the play,” Girouard said. “The score is 2-2 if they don’t make a play in the outfield.”

In the bottom of the inning, Megan McAllister led off with a single to left center. A double off the right center field wall by Jessica Doucette put runners on second and third with no outs. A single down the right field line by Courtney Knight scored Melissa Cook, pinch running for McAllister, and Doucette to give Georgia the 2-0 lead. Turner then retired the next three batters, two by strikeout, to end the inning.

With two outs in the top of the fourth inning, Hill put the Tigers on the board. She blasted a pitched over the left field fence to bring LSU back within one, 2-1. It was the sixth home run of the season for Hill and her first since an inside-the-park homer against Georgia earlier in the season.

Despite the home run that brought them within a run, the Tigers could not get the bats going the remainder of the game. LSU failed to reach base in its final 10 at-bats in the loss.