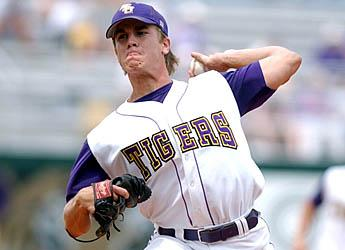 The District VI team encompasses the states of Louisiana, Mississippi, Arkansas, Oklahoma, Texas and New Mexico. Determann is now eligible for election to the national Academic All-America team, which will be announced on May 31.

Determann, a product of Catholic High School in Baton Rouge, has a 3.781 gpa in biology. He will graduate later this month and begin classes this fall at the LSU Medical School in Shreveport.

Determann is 3-0 this season with a 1.93 ERA and six saves. He has allowed just 34 hits in 42 innings while recording five walks, 49 strikeouts and a .215 opponent batting average.

Determann has worked as LSU’s primary relief pitcher the past three seasons, recording a 3.14 ERA in 61 career appearances. He has a 17-5 career record with eight saves.

Determann is the first LSU player to earn Academic All-America recognition since the late Wally Pontiff Jr. was honored in 2002.