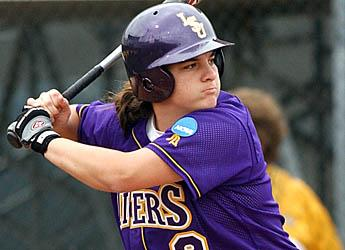 To be nominated for the Academic All-America team, a student-athlete must be at least a sophomore starter or significant reserve on her team with a 3.20 cumulative grade point average. District Six represents student-athletes in the states of Arkansas, Louisiana, Mississippi, New Mexico, Oklahoma and Texas.

Hill earned the honor for the second straight year, after being named to the Academic All-District first-team last season.

A double major in political science and finance, Hill carries a 3.855 cumulative grade point average. While a senior academically, the Harahan native is a junior eligibility wise after not playing her first year at LSU and walking on during her second year. She plans to attend law school following graduation.

A member of the Purple and Gold Challenge All-Tournament team, Hill ranks in the top 10 in the Southeastern Conference in doubles and has the second-best fielding percentage by a first baseman in the league. Tied for the team lead with 18 multiple-hit games, Hill has also recorded five multiple-RBI games. Against No. 16 Florida, Kentucky and Arkansas, she knocked in the game-winning runs.

She will now be added to the Academic All-America ballot, and the team will be announced in early June.