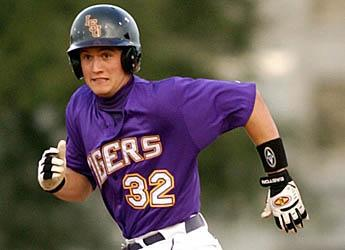 The games can be heard statewide on the LSU Sports Network (WDGL 98.1 FM in Baton Rouge). The radio broadcast and live stats are also available on the LSU Athletics web site, www.LSUsports.net.

Determann, though a junior in athletic eligibility, has completed his four-year course of study in biology, and he will enter the LSU Medical School in Shreveport this fall.

LSU is tied with Alabama for first place in the SEC West, while Tennessee leads the SEC East and the overall conference standings. The Tigers enter this weekend’s series 1.5 games behind the Volunteers in the overall league race.

Tennessee posted a three-game sweep over South Carolina last weekend, and the Volunteers have won five of their last six league contests.

LSU center fielder Ryan Patterson, recently named the top senior player in the country by Baseball America magazine, leads the Tigers with a .383 average and 17 homers. Patterson is No. 1 in the SEC in total bases (148), and he is second in the league in runs (60), doubles (19) and slugging percentage (.767).

Catcher J.P. Arencibia led Tennessee to a three-game sweep of South Carolina last weekend. He recorded 15 putouts behind the plate in Friday’s 3-2 win and revved up UT’s offense with a two-run homer. The home run was his 12th of season, which broke Todd Helton’s Tennessee freshman home run record (11, set in 1993).

On Saturday, Arencibia reached base on a single in the bottom of the 10th inning and later scored the game-winning run on a series-clinching triple by Chase Headley. Arencibia went 3-for-4 on Sunday with two RBIs and one run scored as Tennessee swept its first SEC series of the season. During the entire series, the true freshman led the Vols with a .462 batting average, six hits, one home run, five RBIs and a .692 slugging percentage. He leads the SEC this season with 59 RBIs.

LSU leads the overall series with Tennessee, 38-11, and the Tigers have a 19-4 mark against the Volunteers over the past nine seasons. LSU has won six of its last seven SEC series against Tennessee — the Volunteers’ last series victory over the Tigers came in 1999 in Knoxville.

LSU has won three straight series over the Vols, including a 2-1 series victory last season in Knoxville. Tennessee recorded an 8-6 win in Game 1 before the Tigers responded with 11-5 and 11-1 victories.

INTERNET:
radio broadcast and live stats of all three games at www.LSUsports.net