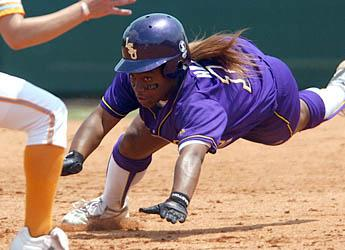 GAINESVILLE, Fla. — The LSU softball team placed two players in the All-Southeastern Conference teams as the Tigers begin defense of their SEC Tournament championship in a rematch of the 2004 title game against Georgia on Thursday at 6:30 p.m. (CT) at the Florida Softball Field.

The first round game, and all of the SEC Tournament games, can be heard on the LSU Sports Network in Baton Rouge on Country Legends 107.3 FM and on the internet at www.LSUsports.net.

“I thought we played well against Georgia,” said LSU head coach Yvette Girouard. “Obviously Georgia is the elite of the SEC and just finds a way to win, but I thought all three games against them were very well played. I guess if we had to draw any opponent, then we should be pleased to have drawn Georgia.

“We have to go out there and play our game and limit the mistakes that we can control. If we play hard and perform like we are capable of performing, then I think we should be in a position to win.”

A three-time Louisiana Pitcher of the Week and April 18 SEC Pitcher of the Week, Turner has posted a 16-14 overall record with a 2.29 earned run average. The 2005 Tiger Classic and Purple and Gold Challenge All-Tournament team selection ranks in the top eight in the league in opponent’s batting average, innings pitched, strikeouts, strikeouts looking, wins, appearances and games started.

She has posted five double-figure strikeout performances this season, including a career-best 14 against Columbia. Between April 7 and April 16, the Chula Vista, Calif. native threw 26 consecutive innings without allowing an earned run and has recorded a complete-game two-hitter and four complete-game three-hitters on the season.

A member of the USA Softball Player of the Year preseason watch list, Harris was named to the 2005 Purple and Gold Challenge All-Tournament team earlier this season. The outfielder from Hendersonville, Tenn., broke the LSU single-season record and ranks ninth in the NCAA in hit by pitches per game. In addition, she ranks in the top 10 in the SEC in on base percentage, runs scored, walks and stolen bases.

On 12 occasions, she has recorded multiple-hit games and twice posted multiple-RBI games. Harris knocked in the game-winning run in extra innings at South Carolina earlier this season and ranks in the top 10 in career hit by pitches, stolen bases, walks, home runs, triples, runs scored and RBIs in school history.

The Tigers (30-21, 12-18 SEC) enter the tournament as the eighth seed after finishing the season in a tie with Mississippi State in seventh place overall, a half game behind South Carolina in sixth place.

After claiming their second SEC regular season championship, the Bulldogs (48-12, 26-4 SEC) enter as the tournament’s top seed, ranked eighth nationally. The Tigers were swept by Georgia in Athens early in the season in three close contests, falling 3-2, 2-0 and 4-1 in the three-game series.

The four-day tournament will conclude with the championship game on Sunday at 1 p.m. (CT). That game will be broadcast on FSN Southwest in Baton Rouge on cable channel 38.