Track and Field to Begin Competition at SEC Championships on Thursday 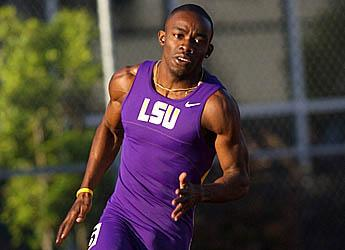 BATON ROUGE — Coming off a 12-day break the LSU track and field team returns to action this Thursday through Sunday when it travels Nashville, Tenn., for the SEC Outdoor Championships at Vanderbilt Track.

In a meet that will likely foreshadow next month’s NCAA Championships in Sacramento, Calif., the Tigers and Lady Tigers will compete against the nation’s elite as seven teams on both the men’s and women’s sides are ranked among the top 25.

For the men, the county’s top-three teams, in Arkansas, Florida and LSU, will lead the way, while the women’s field will be highlighted by No. 3 South Carolina, No. 4 Tennessee and No. 9 Florida.

“Particularly on the men’s side, I feel we are more of a national caliber team. We are lacking a little bit of the depth that you need at the conference level,” said LSU head coach Dennis Shaver. “That not to say we don’t want to win, you always want to win, but we are taking people to this track meet with the idea that we have put them in the best position to score in their specialty event.”

On the track, many of the LSU athletes will be running in their signature events for the first time in nearly a month after spending their last few competitions at relay laden meets like the Texas and Penn Relays.

Olympians Kelly Willie and Bennie Brazell will take to the track in the 400 meters and 400 hurdles, respectively.

Willie, who posted the United States’ and NCAA’s fastest 400-meter clocking in his only open quarter race of the year, enters the meet as the conference’s defending champion.

Brazell will be seeking the first individual SEC title of his career as he owns the conference’s top hurdles time to date.

Making his season debut in the 200 meters will be freshman standout Xavier Carter. The 2005 SEC Men’s Indoor Runner of the Year will be eyeing the regional qualifying standard as well as a position among the conference’s elite.

On the women’s side, freshmen sprinters Kelly Baptiste and Ashley Owens will double on the track as they are each scheduled to run both the 100 and 200 meters.

Baptiste is ranked among the nation’s top 12 and the conference’s top four in each event and is coming off an impressive third-place finish in the 100 meters at the Penn Relays.

Owens enters the meet ranked No. 4 in the country in the 100 meters according to Trackwire. She has also posted a time that ranks in the conference’s top 10 in the 200 meters.

“In the individual events we need to be at our best at these championship meets,” said Shaver. “If our athletes can do that, there is nothing more we can ask.”