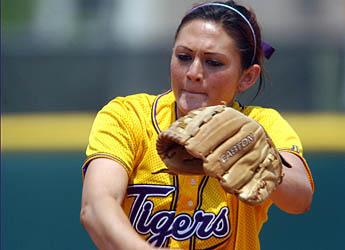 BATON ROUGE — LSU sophomore pitcher Emily Turner was named the Louisiana Pitcher of the Week, earning the final honor of the season as chosen by the Louisiana Sports Writer’s Association.

With the pitching performance of her career, despite going 0-2 against No. 10 Tennessee, the Chula Vista, Calif., native allowed just three runs and nine hits with a walk and 17 strikeouts in 18 innings. Throwing a pair of complete nine-inning games, Turner held the nation’s third-best hitting team, entering the series at .333, to a .159 batting average.

The Tigers return to action in the SEC Tournament in Gainesville, Fla., this weekend. LSU will face off with SEC regular season champion Georgia in the first round at 6:30 p.m. (CT) on Thursday, in a rematch of the tournament championship game last season that the Tigers won, 4-1. The four-day tournament will conclude with the title game on Sunday at 1 p.m. (CT) with the winner earning the league’s automatic bid to the NCAA Tournament.