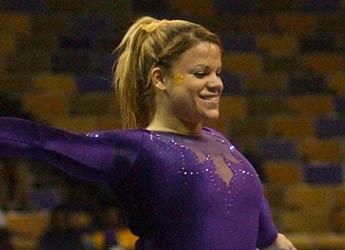 A three-time Academic All-American, the Tampa, Fla., native, is also a three-time member of the SEC Academic Honor Roll. A psychology major, she was the 2003 Mortar Board Scholar-Athlete of the Year and carries over a 3.90 cumulative grade point average.

As member of the nationally ranked women’s gymnastics team, Companioni was a 2002 All-American on the floor exercise. This season she competed on the balance beam and the floor for the Tigers in 2005. At Texas Women’s she scored a 9.900 on the floor to finish in a three-way tie for first. She also notched a 9.875 on the floor at the NCAA Northeast Regional Championship to help LSU advance to the NCAA Championships.

In addition, Companioni was recently named to the Who’s Who Among Students in American Colleges and Universities honors program and was a selection on the 2005 Southeastern Conference Good Works team. A member of the Student-Athlete Advisory Committee, she has spoken at local elementary and high schools about the importance of time management and academics.

In addition, she has participated in the Alzheimer’s Services Capital Area “Walk/Run to Remember”, Steve Hood’s Total Dance Experience, a fundraiser benefiting St. Jude Foundation, and visited the pediatric ward at Our Lady of the Lake Regional Hospital.

The $5,000 scholarships are awarded to those who maintain at least a 3.0 grade-point average and perform with distinction in varsity competition. Companioni becomes the 16th LSU student-athlete to be awarded the NCAA Postgraduate Scholarship.