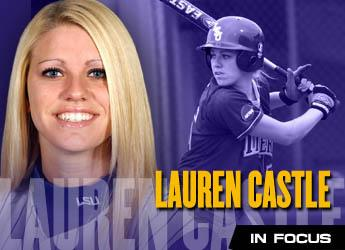 Lauren Castle is an intimidating presence for opposing Southeastern Conference softball pitchers. With a tall, lean build, the junior designated player just looks like a hitter, and her presence at the plate has been a major reason for the Tiger’s turnaround at the end of the regular season.

In fact, Castle has been a rock in LSU’s line-up since her arrival in Baton Rouge, an event that almost didn’t happen.

Castle, who graduated Comeaux High School in Lafayette, signed with the University of Louisiana-Lafayette. During her freshmen year, she helped lead the Lady Cajuns team to the Women’s College World Series, but decided to transfer at the end of the season. Castle contacted LSU head coach Yvette Girouard about playing for the Tigers.

“She actually graduated from my former high school,” said Girouard, a Lafayette native and former head coach at ULL. “I was very familiar with her and I always thought she was a tremendous person with incredible work ethic.”

According to Castle, she was also very aware of Coach Girouard and that she was a critical factor in her decision to attend LSU.

“I grew up in Lafayette and she coached at ULL for a long time,” Castle said. “She did a great job over there, and I wanted to come play for her over here.”

After a full release was granted by the Lady Cajuns, Castle began her LSU career last season and was quick to make her presence felt. During her sophomore year, Castle led the team with a .367 batting average and was named a second-team All-SEC selection and an Easton Third-Team All-American.

Despite her high batting numbers Castle’s game focuses little on the long ball. Instead she has become one of the SEC’s best slap hitters who can also swing away with power.

“When I was at ULL I was always hitting away,” Castle said. “Once I got here, I got back in to slapping and it’s really made me more versatile. I have a lot more options offensively.”

“I think working with (assistant coach) Lori Osterberg has really improved her game,” said Girouard. “She’s not a typical slapper. Those are usually small kids. She’s a great looking athlete, so she’s really deceiving. She has the short game, she can bunt, and she gets RBIs.”

Castle’s small ball approach has carried over into this season. While she only has one home run, Castle again leads the team again in hitting with a .367 average and 55 hits. In addition she ranks in the top 10 in the SEC in doubles with 14 and with two triples is tied for the team lead.

Perhaps more important to the Tigers than her statistical accomplishments is the example that Castle sets for the rest of her teammates. The LSU squad boast no seniors and nine freshmen on a roster of seventeen and that youth contributed to early struggles in conference play. While she might disagree, Castle’s coach gives the junior great respect as a team leader.

“I pointed her out to someone the other day,” Girouard commented. ‘I said, ‘If you want to follow someone, follow someone like Castle.’ She’s almost always doing the right thing. She will do anything for her teammates, and she will outwork anyone.”

Castle however, shies away from such praise and does not think of herself as a leader. She is also quick to praise her teammates for the team’s success.

“Everyone has got each other’s back,” said Castle. “We hit some rocky spots this season, and we all had our down weekends but everyone takes a leadership role out here. We all stay after practice and throw extra to continually improve.”

According to Castle, the team’s unity has played a critical factor in their latter season success.

“We’ve stuck together and now we’re in the SEC tournament and it’s a whole new season,” she said.

Castle will look to help pull her team through next weekend in Gainesville, Fla., host site for the 2005 SEC Softball Tournament. The Tiger’s will be looking to claw their way into NCAA postseason play, and every game will be critical.