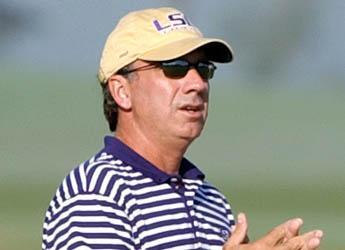 BATON ROUGE — The 30th-ranked LSU men’s golf team received a bid from the NCAA Selection Committee on Monday to compete as the 11th seed in the West Regional, which will be played at Stanford Golf Course in Stanford, Calif., May 19-21.

This marks the fourth NCAA Regional appearance for LSU in the Greg Jones era and the first time the team will participate in the West Regional. The Tigers are looking to qualify for the NCAA Championships for the first time since 1997, and Jones says his team is looking forward to the challenge.

“This is exciting for our team, but we’re not going out there just to be there,” Jones said. “This is why our guys came to LSU — to go to regionals, play in the NCAAs and compete for a national championship. We’ve got a great opportunity to go out and do something special.

“Looking back, we may have had some more talented teams, but I don’t think we’ve ever had as hungry a team. The adversity that we’ve gone through this year has given our guys more character, more drive, more fight and more focus. Hopefully, Mark (McEntire) and I will get them prepared and put them in a position to be successful.”

A total of 81 teams and 18 individuals from schools not competing in postseason play were chosen to participate at three regional sites, including the East Regional in Nashville, Tenn., the Central Regional in South Bend, Ind., and the West Regional in Stanford, Calif.

The top 10 teams from each region and top two individuals not among the top 10 teams will advance to play in the 2005 NCAA Division I Men’s Golf Championships at Caves Valley Golf Club in Baltimore, Md., June 1-4.

“I’m a little surprised about how many teams from the East are heading out there, but it looks like they tried to balance out the regions pretty well,” Jones said. “We wanted to have a balanced regional and we got that in Stanford.”

Nine other teams from the Southeastern Conference join LSU in NCAA Regional play, including Georgia, Florida, Tennessee, Alabama and Vanderbilt in the East Regional, Kentucky and Arkansas in the Central Regional, and Auburn and South Carolina in the West Regional. Jones says he is not surprised that so many teams were picked to represent the SEC in the postseason.

“The SEC has been loaded this year and all of the teams that were picked certainly deserved it,” Jones said. “It’s a tribute to our conference. That’s what we recruit at LSU. We recruit to the conference, to the school and to the competition. It’s something that really doesn’t surprise anybody.”

The final three rounds of the 2005 championships will be televised by The Golf Channel. Daily coverage (June 2-4) will be from 3-5 p.m. EST.