Soccer Adds Natalie Martineau to List of Signees for 2005 Season 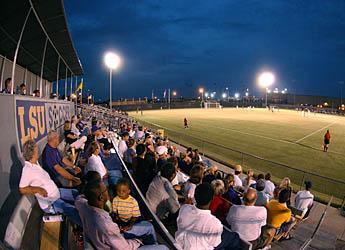 Martineau, a midfielder from Oakville, Ontario, Canada, is the eighth student-athlete scheduled to join the Tigers for the upcoming year.

“We are extremely excited to add a player of Natalie’s pedigree and quality to the LSU program,” said Lee. “She has been performing well with the U20’s this spring. (Assistant coach) Debbie (Hensley) did a great job as our key recruiter. Natalie is the type of player and person that will add a great deal to our team and the LSU community.”

Martineau, who plays for the Toronto Lynx, is currently a member of Canada’s U18 National Team as well as the Canadian U20 National Team Pool. As a member of the national pool she has participated in two U20 camps this spring and is scheduled play in U18 Canadian NT vs. the United States’ U18 game at the Adidas Cup in Houston on May 30.

A complete list of LSU signees for the 2005 season follows below.