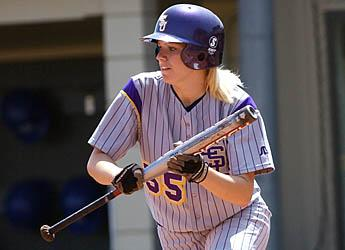 BATON ROUGE — For the second straight day, Emily Turner and the LSU softball team held the Southeastern Conference’s top hitting team scoreless through eight innings, but a pair of runs by No. 10 Tennessee in the top of the ninth was the difference as the Lady Vols held on for the 2-0 win on Sunday afternoon at Tiger Park.

With the loss, the Tigers conclude the regular season at 30-21 overall and 12-18 in SEC play. LSU will advance to the SEC Tournament next weekend as the eighth seed to take on regular season champion Georgia on Thursday in Gainesville, Fla. Tennessee improved to 56-11 on the year and 20-8 in league play and will take on host Florida as the fourth seed next weekend.

Turner was once again magnificent in the circle for the Tigers, but the LSU offense failed to provide her with any support. In the complete-game loss, she allowed just two runs on five hits with a walk and five strikeouts, falling to 16-14 on the year.

“It’s a crying shame that Emily pitched this well and we couldn’t push a run across for her,” said LSU head coach Yvette Girouard. “Hopefully you are seeing the emergence of Emily Turner. She handled a very good Tennessee team and was dominating.”

In the two games that Turner pitched, she scattered just nine hits and three runs over 18 innings, while striking out 17 batters, matching the NCAA leader in strikeouts Monica Abbott on the weekend.

“Emily showed a lot of maturity and a lot of savvy and has nothing to show for it except that perhaps she gained some confidence,” said Girouard. “My one positive out of this is that hopefully she is staring to believe that she is that good because I thought she matched Abbott pitch for pitch.”

For the second straight day, the Tiger offense could not come up with the timely hit as LSU was held to a lone Lauren Castle single. In the third, the Tigers stranded a pair of runners on base. Three innings later, LSU had a runner on first with no outs, but a double play ended the Tigers’ chances.

“It is disappointing that, bottom line, we did not execute,” said Girouard. “Anytime we had to bunt, we couldn’t bunt. We had all the key people up and nobody stepped up. In a big game like this when you have two powerhouse pitchers on the mound that are locked in, it comes down to one inning, people executing and who wants it more. I believe Tennessee wanted it more.”

In the bottom of the third with two outs, Castle recorded LSU’s only hit of the game with a single up the middle. Camille Harris was then hit by a pitch, her SEC-leading 14th plunk of the season, to move Castle to second. Unfortunately, Leslie Klein struck out swinging to end the inning.

Tennessee broke up the perfect game by Turner in the top of the fifth. With one out, Tonya Callahan drew a walk, the only walk allowed by Turner on the weekend. With LaDonna Oliver running for Callahan at first, she moved to second on a sacrifice bunt. With two outs, Stacey Jennings flew out to center field to end the threat.

In the top of the sixth, Kenora Posey led off with a single, breaking up the no-hitter by Turner. After a strikeout, a groundout advanced Posey to second. Sarah Fekete then grounded out to end the inning.

Castle reached on a fielding error by the third baseman to lead off the bottom half of the inning. With Dee Dee Henderson running at first, she was doubled up when Harris popped up a bunt to first base.

With two outs in the bottom of the seventh, Lauren Delahoussaye drew a walk, the first allowed by Abbott in the game. Vanessa Soto then grounded out to end the inning.

In the top of the eighth with two outs, Posey singled up the middle for her second hit of the game. A grounded out then ended the inning for Tennessee.

Things went sour for the Tigers in the top of the ninth inning as Lindsay Schutzler led off with an infield single. After she stole second, a single up the middle by Fekete scored the first run of the game as Schutzler scored.

With one out, Katherine Card recorded an infield single, sending Fekete to third. A controversial hit by pitch on Callahan loaded the bases before a infield ground out by Shannon Doepking scored Fekete to run the score to 2-0. LSU could not mount a rally in the bottom half of the inning, as the Tigers were retired in order to end the game.