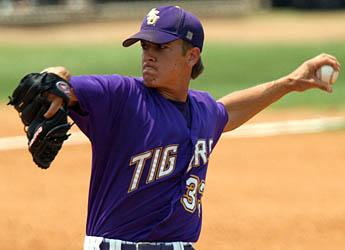 The Tigers will next be in action when No. 13 Tennessee visits Alex Box next weekend. The Volunteers (35-14, 15-8), coming off a sweep of No. 18 South Carolina, are in sole possession of first place in the league. LSU will enter the series 1.5 games behind Tennessee in the overall SEC standings.

Smith (8-2) entered Sunday’s contest with three straight complete games to his credit and a scoreless innings streak of 25.2. Despite yielding three runs, two of which were earned, the junior was solid for 6.2 innings. He allowed six hits, walked two and struck out seven.

“(Smith) threw okay — good enough to win,” said head coach Smoke Laval. “He competed and didn’t give in and kept us close. He got a little bit tired there late, and we tried to get an extra inning out of him.”

Kentucky freshman Andrew Albers (4-5) suffered the loss and was tagged for six runs (three earned) on eight hits in five innings of work. Albers walked four and struck out two.

On Saturday, LSU tagged many hard-hit balls that were right at Kentucky defenders. On Sunday, the Tigers’ hits found holes and LSU was aided by three errors.

Clay Harris and Blake Gill each tallied two hits and drove in one, while Nick Stavinoha extended his hitting streak to eight games with his two-hit game. Jackson drove in his two runs with a single in the first.

Jordan Mayer, the Tigers’ leading hitter on the weekend, led off the second with a double. Albers then issued back-to-back walks to Quinn Stewart and Matt Liuzza to load the bases. With two outs, Jackson rolled an opposite field ground ball in between the first baseman and second baseman and into right field, scoring both runners.

Smith worked the first three frames without surrendering a run. In the fourth, Smith gave up back-to-back hits to start the inning, threatening his consecutive scoreless innings streak.

Then John Shelby broke through with a RBI single and took second when Stewart misfired over the cut-off man to the backstop. Shaun Lehmann scampered home on the errant throw and got the Wildcats to within a run. After 28.2 remarkable scoreless innings pitched, Smith’s streak was broken up.

“My shoulder got a little tired at the end,” said Smith. “It is kind of hard not to think about it (the streak) with it in the newspaper and everyone talking about it. I tried not to focus on it as much as possible and just focus on the Kentucky hitters.”

Kentucky committed its fifth and sixth errors of the series in the fourth; both proved to be costly. Liuzza reached base to start the inning when right fielder Billy Grace mishandled his fly ball. Two outs and four batters later, Albers should have been out of the inning.

Stavinoha popped up to first baseman Michael Bertram, who misjudged the ball and allowed Liuzza to score. Clay Harris made the error hurt with a two-out single to extend the lead to 5-2.

Reaching the 100-pitch mark in the seventh, Smith tired and was lifted after allowing a RBI single to Ryan Wilkes. Jason Determann came in and recorded the final out of the inning with a strikeout of J.B. Schmidt.

Determann was brilliant again after working two perfect frames on Friday. The junior left-hander allowed just one hit over the final 2.1 frames en route to his second save of the weekend and sixth of the season.

Gill and Liuzza tacked on two insurance runs in the eighth with a double and single, respectively.