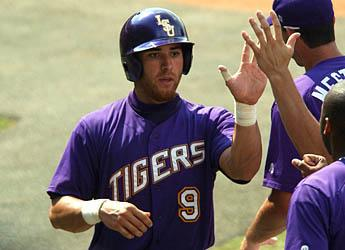 BATON ROUGE — Kentucky built a 7-0 lead after four innings of play on three-run homers by J.B. Schmidt and Shaun Lehmann, handing No. 8 LSU a 7-1 loss in the second game of a Southeastern Conference series at Alex Box Stadium on Saturday.

The Tigers (32-16, 13-10 SEC) entered the day with a share of first place in the SEC Western Division race. Alabama also held a 13-10 league record before its second game with Mississippi State. The Crimson Tide and Bulldogs play Game 2 at 6:30 p.m. Saturday.

Kentucky (24-21, 6-16) forced the second straight rubber game between the two teams, which gets underway at Noon on Sunday. The teams split in the first two games last season in Lexington, before the Tigers responded with a 15-4 win on Sunday.

Both teams collected 10 hits on Saturday, and Kentucky starter Aaron Tennyson (6-1) scattered seven hits and limited LSU to one run in five innings. He walked one and did not record a strikeout.

“We don’t strike out at all, and we strike them out 10 times,” said head coach Smoke Laval. “We hit the ball hard, so you can’t change your approach. It is one of those games that is tough to swallow because you did a lot of things right.”

A defensive miscue allowed the Wildcats to plate four in the second off Dirks.

Chris Jackson booted an inning-ending groundball from Ryan Wilkes, allowing a run to score and keeping the frame alive for the top of the Kentucky order. Schmidt wasted little time in taking advantage of the error by depositing Dirks’ offering over the left field wall for a three-run homer — the first of his career.

LSU faced an early 4-0 deficit for the second time in as many games. The score increased to 7-0 as Dirks labored into the fourth. With two runners on courtesy of a walk and hit-batsman, Lehmann blasted a three-run homer into the left field bleachers.

Two batters later, Dirks’ day was over after allowing a two-out single to John Shelby.

Meanwhile, Tennyson avoided trouble with spectacular Wildcat defense on several hard-hit balls. The Tigers finally got on the board in the fifth on a RBI single by Patterson. With two outs and two on, Stavinoha lined out to left field, stranding the runners.

Tennyson was lifted in the sixth when LSU was presented with its best scoring threat of the afternoon. Clay Harris singled to start the frame bringing a pitching change to reliever Brock Baber. Will Harris greeted Baber with a single of his own, and the Tigers had runners at first and second with no outs.

Stewart then rolled a groundball to shortstop for a 6-4-3 double play. One pitch later, Dustin Weaver grounded out to third and the threat was over.

The eighth inning summarized the day for the Tigers. Patterson belted a fly ball to the deepest part of the ballpark — at the 405-foot sign — for an out. Clay Harris also looked to have a single up the middle, but Harris’ ball ricocheted off of the pitching rubber right to the second baseman Shelby, who turned an inning-ending double play.

“We hit at least 15 balls right at them, especially with two outs and runners on” said Patterson. “It seemed like everything we hit was on the nose, but they were right there to make the play. Our goal is to win every series this second half of conference (play). We still have a shot to do that, so we are going to come out here tomorrow and hope to get the series win.”

Baber qualified for his fifth save and faced the minimum in the ninth.