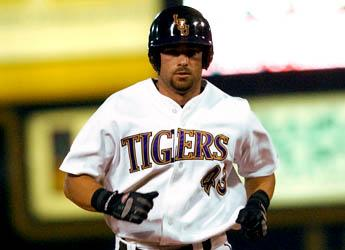 BATON ROUGE — Right fielder Nick Stavinoha’s three-run homer in the bottom of the sixth and first baseman Blake Gill’s two-run double in the bottom of the seventh completed a furious four-run comeback for eighth-ranked LSU, as the Tigers held on for a 6-5 win over Kentucky and moved into a tie for first place in the SEC Western Division Friday night at Alex Box Stadium.

The Tigers (32-15, 13-9) won their first SEC series opener at home this season and registered their 15th come-from-behind win. LSU has won eight of its last nine SEC games.

The Wildcats (23-21, 5-16) dropped their 10th straight conference series opener and have not won the first game of a league series since defeating LSU last season in Lexington.

After Friday night’s completed SEC slate, the Tigers have moved into a tie for first place in the Western Division standings with Alabama. The Crimson Tide suffered a 7-3 loss at Mississippi State.

LSU senior Lane Mestepey (6-6) batted through early trouble Friday night to pick up his first win since March 18 at Georgia. Mestepey turned in a gutsy seven innings, giving up five runs (three earned) on seven hits. He walked four and struck out three in earning his 35th career victory. Mestepey is now three wins away from tying Scott Schultz as the all-time leader in LSU pitching victories with 38.

“I never let anything get to me,” said Mestepey. “I just kept throwing the ball and trying to get strikes. My defense did the work with some double plays, and I was very fortunate.”

Stavinoha homered for the third time in the past four games as part of a four-run seventh. Designated hitter Jordan Mayer added a pair of hits.

The error allowed Shaun Lehmann to lay down a sacrifice, moving the runners in scoring position. Mestepey’s misfortune continued with two outs when Michael Bertram dropped a shallow fly ball in between Patterson and Hebert, scoring both runners and giving Kentucky an early 2-0 lead.

Two singles to start the third and a hard liner by Bertram put Mestepey on the brink of being lifted. A 6-4-3 double play ball by Collin Cowgill erased a massive jam but tacked on another run for the Wildcats, who led 4-0 after three innings of play.

“The thought crossed my mind of taking him out,” said head coach Smoke Laval. “But it was a gamble that paid off. I have to get him back in the saddle to win ball games. It could have backfired. I wanted him to take it to the next level.”

Gibson, who entered the contest with a 5.71 ERA, took a no-hitter into the fifth. With one out, Mayer blasted a hard single off of Schmidt’s glove at third for LSU’s first hit of the game.

“His pitches had a little late life on them with (Greg) Maddux-type stuff,” said Laval. “Gibson was very good.”

Gibson battled and held the Tigers scoreless entering the sixth. Chris Jackson was able to reach on a one-out errant throw by Schmidt, which jump-started a four-run frame that would tie the game at 4-4.

After Gill flied out, Patterson took first base on a hit-batsman. Then Stavinoha delivered the clutch hit, belting Gibson’s 2-2 offering over the left field wall for a three-run homer — his 14th of the season — to cut the deficit to 4-3.

Clay Harris was hit by a pitch, and a single by Mayer ended Gibson’s day after tossing 5.2 innings of three-hit ball. Snipp inherited two-out trouble and looked to have escaped with Quinn Stewart’s groundball. Shortstop Ryan Wilkes committed a two-base error allowing the tying run to score.

The first two batters reached in the home half of the seventh. Gill attempted to sacrifice the runners over on the first two pitches but fell into a 1-2 hole. With the bunt off, Gill then pulled a two-run double into the right field corner, scoring Jackson and Michael Hollander.

Bertram immediately put the pressure on in the eighth, drilling a leadoff triple and ending Mestepey’s evening. Jason Determann forced a groundball from Cowgill, which made it a one-run ballgame at 6-5.

Determann was able to strike out the next two batters in the eighth and complete a scoreless ninth en route to his fifth save of the season.