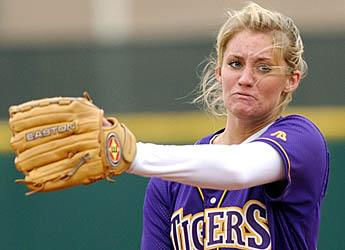 BATON ROUGE — Coming off a series sweep of nationally ranked Florida last weekend, the LSU softball team will close out the regular season with a three-game Southeastern Conference series against No. 10 Tennessee, beginning with a doubleheader on Saturday at 1 p.m. at Tiger Park, as part of the “Park the Park” weekend.

The first 150 in attendance each day will receive a bobble head of LSU head coach Yvette Girouard commemorating her 1,000th career victory earlier this season against Arkansas and her induction into the NFCA Hall of Fame later this year. In addition, prizes will be awarded for the person dressed in the most creative beachwear. Three bicycles will be given away as part of the “Strikes for Bikes” promotion, while one lucky lady will also win a diamond courtesy of Robert Roth Jewelers in the “Diamond Dig”.

With their sweep of the Gators last weekend, the Tigers (30-18, 12-15 SEC) earned a bid to the conference tournament next weekend in Gainesville, Fla. LSU is currently the sixth seed overall, a game ahead of Mississippi State and a game and a half ahead of South Carolina.

Tennessee (53-11, 17-8 SEC) also enters the series on a roll after having won 9 of its last 11, including five straight. The Lady Vols are currently the fourth seed overall, three games ahead of Florida.

“Tennessee is a quality opponent,” said Girouard, “but we’ve practiced hard all week in preparation. Now, we just need to go out and hit the ball hard, execute our game plan and play defense. If we can play hard and perform like we are capable of performing, then we will put ourselves into a position to win.”

Emily Turner leads the Tigers in the circle this season with a 16-12 record and a 2.41 earned run average. The sophomore was 2-0 last weekend at Florida with a pair of complete-game shutouts. Freshman Megan Jolly has been steadily improving from a rib injury earlier in the season and now stands at 7-4 on the year with a 2.35 ERA. While picking up the win in relief in game one against the Gators last week, she has now allowed just two earned runs in her last 26 innings.

As a team, LSU has recorded a 2.62 ERA on the year with 12 complete-game shutouts and 285 strikeouts, while allowing just 112 walks in 307.2 innings. Over the last 12 games, the young Tiger pitching staff has really been improving. They are 9-3 with a 1.73 team ERA and five complete-game shutouts, averaging over seven strikeouts per game.

2004 SEC Pitcher of the Year Monica Abbott leads Tennessee in the circle. She leads the nation in wins with a 37-7 record and ranks fifth with an 0.60 ERA. In addition, she has struck out 478 on the year, averaging 12.0 strikeouts per game, fourth-best in the nation. As a team, the Lady Vols boast a 0.85 ERA with 38 shutouts and 654 strikeouts.

“They have one of the best pitchers in the nation in Monica Abbott,” said Girouard. “She has made an enormous impact on their program since her arrival last season and is what makes Tennessee such a formidable opponent.”

Junior Stephanie Hill leads the Tigers at the plate this season with a .383 batting average, ninth best in the SEC this season. In addition, the first baseman has recorded 12 doubles, five home runs and 28 RBIs on the year. Junior Lauren Castle is just behind Hill with a .381 average on the season. She boasts 14 doubles with two triples, a home run and five stolen bases.

One of the best doubles-hitting teams in the nation, four players have recorded double-figure doubles totals this season, led by freshman Vanessa Soto with 16. With 86 two-baggers, the Tigers ranks second in the SEC as a team this season and have recorded more doubles through 48 games than any team in LSU history.

On the year, six Tigers are hitting over the .300 mark as LSU is batting .313 as a team, which ranks fourth in the league. Along with the 86 doubles, LSU has posted seven triples and 30 home runs for a .462 slugging percentage, fifth-best in the SEC. The Tigers have also stolen 67 bases (1.40 per game) with a .961 fielding percentage.

Sarah Fekete leads Tennessee and the SEC with a .496 batting average, including 43 runs scored and 29 stolen bases. Seven Lady Vols are batting over .300, including three hitting over. 400, as Tennessee has posted an SEC-best .333 team batting average this season. The Lady Vols have recorded 74 doubles, 12 triples and 46 home runs for a .472 slugging percentage with 115 stolen bases (1.80 per game) and an NCAA-best .983 fielding percentage.