Lady Tigers Tied for Eighth After Round One in Central Regional 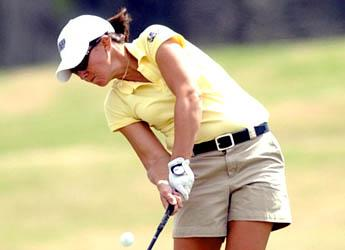 LUBBOCK, Texas — The LSU women’s golf team put itself in a qualifying position after the first round of the NCAA Central Regional golf championship at the Rawls Course Thursday on the Texas Tech campus.

LSU, the fourth seed in the 21-team field, needs to be in the top eight teams at the end of the 54-hole tournament on Saturday, to qualify for the NCAA Division I Women’s Championship Tournament in Sunriver, Ore., May 17-20.

The Tigers, with only one player with more than one regional appearance and two making their regional debut, rallied late in the round to post a 10-over par 298 score to finish in a two-way tie for the eighth and final qualifying spot after the first 18 holes.

The Central Regional, listed by many golf writers as the toughest of the three NCAA Regionals taking place this week, did get a little off track in the afternoon wave as 13th seed Purdue and 17th seed Texas A&M tried to squeeze their way into the first-round top eight.

Sixth-seed Texas took the first round lead at two-over 290, one shot better than seventh seed Missouri and third-seed New Mexico at three-over 291. A&M pushed itself into fourth place at five-over 293.

It is another shot back to top-seed and Southeastern Conference champion Auburn at six-over 294, a round aided greatly by a four-under 68 from individual leader Diana Ramage, one of seven under par rounds. Purdue is sixth at seven-over 295, aided by two players shooting one under par 71 with second seeded Arizona State is seventh at 296, two-shots ahead of LSU and 10th seed Tulsa at 10-over 298. Four teams are within two shots of the eighth spot going into Friday’s second round.

LSU senior Brooke Shelton, in her third regional appearance, posted a one-under 35 on her first nine holes (10-18) and finished her first 18 holes at even par, good enough for a tie for eighth place in the individual competition. Shelton tied for 24th in last year’s regional tournament.

Sophomore Melissa Eaton, in her second regional after finishing also tied for 24th a year ago, shot a very steady round of 73 to put her in a tie for 18th. LSU also counted a four- ver 76 from Vicky Meyer and a five-over par 77 from freshman Rebecca Kuhn, playing in her first regional.

“Melissa and Brooke played very steady and Vicky just had one bad hole. For Rebecca and Kim (Meck), they were very close, just a case of getting the butterflies out of their system in their first regional,” said LSU Coach Karen Bahnsen. “We’re very close. We’re in a very good position and just need to keep moving forward on Friday.”

The Tigers and the top 12 seeds will play second on Friday in the second round of the tournament, with LSU teeing off at 12:40 p.m. Seeds 13-21 will tee off tentatively scheduled for 7:30 a.m. although Thursday’s opening round was delayed and tee times pushed back an hour because of fog.

Live scoring for the NCAA Regional competition can be found at www.golfstat.com.