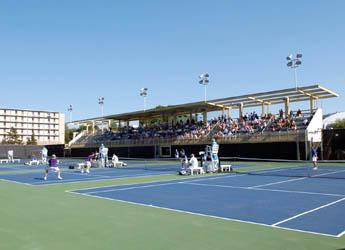 The 10th-ranked Tigers (19-8, 5-6 SEC) will open the tournament on May 13 with a 10 a.m. match against America East conference champion Binghamton. Tulane and Louisiana-Lafayette will play that day at 1 p.m. in Baton Rouge.

The LSU-Binghamton winner will face the winner of the Tulane-ULL match May 14 at noon.

“Our draw was pretty much what we expected,” said LSU coach Jeff Brown. Brown has led his team to the tournament in each of his eight years as head coach.

“We talk all year about being in the top-15 because usually the top 15 or 16 teams will host,” Brown said. “That’s what happened this year.”

It is the second year in a row the Tigers will host the first two rounds. They finished the regular season with 19 wins. That total puts them already ahead of the 2004 Tigers, who finished the season ranked 13th.

The Tigers have faced their two potential second round opponents already this season, beating both No. 20 Tulane and No. 42 ULL.

LSU’s No. 11 seed is its highest since the 2000 season, when they were also seeded 11th. This was the sixth time in Brown’s career that his team earned a top-15 seed.

Draws for the NCAA Singles and Doubles Championships will be released Thursday.