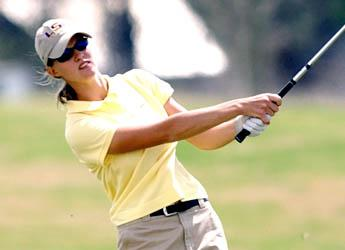 The NCAA Central Regional tournament opens three days of action on Texas Tech’s Rawls Course and 21 teams, including the Lady Tigers, will be looking to advance from this event to the 2005 NCAA Division I Women’s Golf Championships, scheduled for May 17-20, at the Sunriver Resort in Sunriver, Ore.

While winning a college golf tournament is important, it’s finishing in the top eight teams on Saturday afternoon that means the chance to advance to the championships and so during the final round, the leader board focus becomes more on eighth place than first place. In last year’s East Regional, a playoff for the eighth and final spot was delayed nearly two hours, while LSU (which eventually finished 12th) and two other teams hovered close to the eighth spot before falling away.

LSU is the fourth seed in the 21-team field that college experts have labeled the most complete and well balanced of the three regionals being held this week. The rest of the field includes top-seed Auburn (sixth ranked in the country and the recent SEC Tournament champion), Arizona State (4th ranked) and New Mexico (9th ranked) ahead of fourth-seed LSU.

The Rawls course will play 6,328 yards and to a par of 72 for the tournament. The course, just opened in 2003, was built after a major financial contribution from former Texas Tech varsity basketball player Jerry Rawls to provide a golf facility for the Tech teams and students.

Unlike the practice round in the SEC championships at Tunica in a 30-mile wind that really made it impossible for teams to figure how the course would be played during that weekend, Wednesday’s practice round proved to be very helpful to the LSU team.

“The wind didn’t blow at all (Wednesday),” said LSU Coach Karen Bahnsen after the round. “The greens are huge and have plenty of undulations. A lot will depend on what they wind does, but with the conditions today, the girls were able to see the course and feel confident they can make the adjustments. We are ready to go. Again, it’s just a case of focusing on the golf course and each shots and not worrying about the leader boards or what is going on around you. If we can do the things we’ve done the past few tournaments, I feel pretty good about our chances.”

After temperatures in the 50s for the practice round, it was supposed to be mild and in the 70s for Thursdays first round, with showers and wind predicted for Friday’s second round when LSU will tee off in the afternoon.

The Lady Tigers will go with the quintet that has led most of the spring — sophomore Melissa Eaton (75.00 stroke average), freshmen Rebecca Kuhn (75.18) and Kim Meck (76.90), junior Vicky Meyer (75.81) and senior Brooke Shelton (75.22). Eaton tied for fifth in the SEC Championships, while Meck and Shelton tied for seventh in the event at Tunica, Miss.

“The girls have been working hard for this and we look forward to the challenge,” said Bahnsen. “We were so close at the SECs (two shots out of a playoff) even though we didn’t finish at our best. We just need to go out and play with the same focus we have shown in the spring and take care of business to get us to the nationals.”

LSU had only one finish in nine tournaments this year out of the top five and two tournament wins. The Lady Tigers are one of 14 teams in the top 25 this season with two or more tournament victories this season.

Live scoring for the regional events can be found on www.golfstat.com.