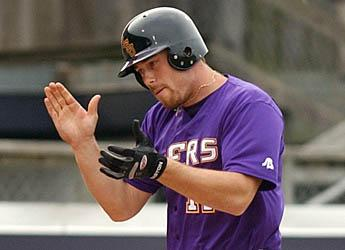 BATON ROUGE — Southern plated six runs in the final three innings to break open a close game and stun No. 8 LSU, 9-5, on a windy Tuesday night at Alex Box Stadium.

LSU continues a seven-game homestand with a three-game Southeastern Conference series against Kentucky this weekend. Game times are scheduled for 6:30 p.m., 2 p.m. and Noon. Friday’s contest will be televised statewide by Cox Sports (cable channel 37 in Baton Rouge).

The Tigers fell to their cross-town rival for only the second time since the two teams first met in 1970. LSU had dominated the series with a 39-1 record all-time entering Tuesday night. Southern’s only previous win over the Tigers came in 2001 — Skip Bertman‘s final season as head coach.

Offensively, LSU pounded 14 hits but four costly double plays kept the Tigers from putting together a big inning. LSU also committed four errors and stranded at least one runner on the bases in every inning.

“Southern played well,” said head coach Smoke Laval. “They were at the top of their game, both offensively and defensively. It’s one of those things. We have had our share of good fortune and had enough hits. I was just trying to look for that fourth starter.”

“We hit into a lot of double plays tonight,” said Patterson. “We swung the bats well but could not get that timely hit. We hit a lot of balls at people. They just played better than us. We had about the same amount of hits but they got the timely ones.”

Justin Meier (1-3) took the loss for LSU in his first start since April 6 versus Rice. The junior right-hander gave up three runs (two earned) on four hits in five innings of work.

Right fielder Gerard Gause was one of four bottom of the order hitters to collect two hits apiece for Southern. Gause homered, drove in a run and scored two.

Southern took an early 1-0 and in the first. Meier surrendered singles to the first two batters and then walked Darren Clark. Kevin Nelson collected the RBI on his groundout, but Gause hit into an inning-ending double play.

Gause homered to leadoff the fifth, drilling Meier’s offering into a stiff north wind over the left field wall.

A stellar defensive double play erased a bases-loaded threat by LSU in the fifth. Both Derek Hebert and Matt Liuzza singled to start the frame and moved over a base on a wild pitch. Blake Gill then lined out to left fielder Mario Spann, who came up firing in time to nail the tagging Hebert at home.

Spann’s brilliant play was one of a handful of defensive gems by the Jaguars on the night.

Jordan Mayer salvaged a run with an RBI double to the left field wall in the fifth, and then sparked the Tigers to within 5-4 with a two-run seventh.

After Mayer lined a RBI double in the seventh, Patterson drilled a run-scoring double of his own off of reliever Damien Givens.

The LSU bullpen became unraveled in the eighth and could not keep the Tigers within a run. Jordan Faircloth was tagged for five straight hits, including a two-run double by Gene Filyaw.

Kevin Cox’ RBI single doubled up the score at 8-4, while Clark’s towering solo homer off of Eric English in the ninth capped the offensive explosion.

Givens held on for the save with a perfect ninth to preserve one of the Jaguars’ biggest wins in program history.