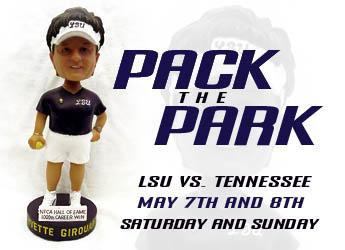 BATON ROUGE — Yvette Girouard bobble head dolls will be given away each day as part of the “Louisiana Luau – Pack the Park” promotion at LSU softball this weekend as the Tigers close out the regular season at Tiger Park against nationally ranked Tennessee in a three-game Southeastern Conference series.

The first 150 in attendance each day will receive a bobble head of the LSU head coach commemorating her 1,000th career victory earlier this season against Arkansas, as Girouard became just the fifth coach in NCAA history to surpass the 1,000-win plateau.

In addition, prizes will be awarded for the person dressed in the most creative beachwear. Three bicycles will be given away as part of the “Strikes for Bikes” promotion, while one lucky lady will also win a diamond courtesy of Robert Roth Jewelers in the “Diamond Dig”.

During the game, pink softball visors and softball boxers will be awarded courtesy of Ochsner’s and LWCC. Fans can also have pictures taken while riding the “Robo Surfer” and participate in the “Giant Rock ‘Em, Sock “Em Robots” competition.

The LSU regular season single game attendance record is 1,238 against Georgia last year, while the largest crowd to see the Tigers play in Tiger Park was 1,506 against Southern Miss in the NCAA Regionals in 1999. In total, LSU has recorded 12 crowds of better than 1,000 in school history, with three of those coming last season.