Senior Moments: Shelton Reflects Back on Memorable Career as a Lady Tiger 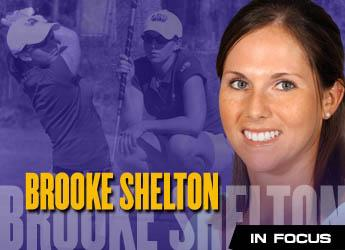 Getting closer to her upcoming graduation on May 20, senior Brooke Shelton of the women’s golf team reflects on her experience at LSU and the decision that brought her to Baton Rouge.

At this time four years ago, Shelton was making final decisions concerning where she would attend school. Arkansas, Oklahoma and Baylor were heavily recruiting her. When she made her first visit to LSU, Shelton had already committed to another school. One visit to LSU made her decision quick and easy.

“When I came to visit here, I liked the coach, the team and the facilities. At that time LSU was ranked top ten in the country. It was kind of a no-brainer for me,” said Shelton.

The experience gained from playing for the Tigers has been a dream come true for Shelton.

“I’m so sad that it’s almost over. I can’t even imagine playing anywhere else,” she said.

As the only senior, Shelton said she felt no pressure in stepping up as a team-leader. During the previous season, Shelton had already emerged as a role model.

“Last year I was the oldest person on our top five traveling team,” Shelton said. “It was me, a sophomore and three freshmen. We had two seniors but they weren’t on the top five, so it was kind of the same thing.”

Shelton ends her senior year tied for tenth in stroke average in the SEC. She was named to the second team All-SEC just last week.

“It’s great. It was one of my goals starting the year to make the All-SEC Team, so it was nice to get it,” said Shelton.

Along with being a student-athlete, Shelton is a member of the Student-Athlete Advisory Council as the golf representative. Being on the board and reaching out to local schools for community service also led to her being named to the 2005 SEC Good Works Team.

“We’ve gone to schools to read to kids, helped with the Christmas Toy Drive and also the Halloween BOO-zar. They get excited but probably not as excited as when the football players go,” she laughed.

Something else exciting for Shelton occurred last week when the LSU Women’s Golf Team caddied for the likes of Eli Manning and golf pros Lee Jansen and Vijay Singh.

“Oh my gosh, it was so much fun. I was in Eli Manning’s group with Lee Jansen. Four other girls took turns caddying in Vijay Singh’s group. When our group finished, we went out there and joined them. He’s the No. 2 ranked player in the world, so it was a huge deal,” said Shelton.

Shelton said they didn’t realize how much attention would come out of this event. Articles and pictures were in the USA Today as well as the PGA Tour and Sports Illustrated websites.

“I think the big thing with it was that he has a bad reputation of not being personable. A few years ago he was critical of Annika Sorenstam playing in the PGA tournament and claimed he would withdraw if she played in his group. I think that’s why the media made such a big deal out of it. The USA Today article said something along the lines of ‘another side of Vijay’,” stated Shelton.

With all of that excitement over, now on the agenda for Shelton and her teammates is to wrap up preparations for the NCAA Regionals in Lubbock, TX starting Thursday.

“We’ve been practicing a lot just trying to play courses similar to the one we’re going to, Shelton said. “Everyone is now just trying to work on the small things that they individually need to work on.”

Along with preparing for finals and the NCAA Regionals, Shelton is mapping out plans post-graduation.

“I’m still thinking about turning pro, but I haven’t decided yet. If I do, I would still play amateur through the summer and then go to qualifying school in the fall,” she said.

Shelton enters her final post-season with 10 career top 10 finishes, including four this season. With her three rounds in the Regionals, she will break into the top 10 in career rounds played at LSU and her four-year stroke average of 76.69 ranks eighth best in the 26 years of the program.