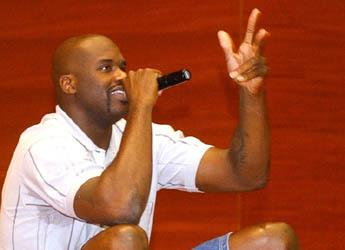 BATON ROUGE — Former LSU basketball star and present-day NBA superstar Shaquille O’Neal informed and entertained a crowd of some 400 LSU student-athletes Wednesday night at the “Bo” Campbell Auditorium of the Cox Communications Academic Center for Student-Athletes stressing time management as a key to being successful in academics and in life.

In a press conference in the auditorium prior to his enthusiastically received presentation, the Miami Heat center talked about that very subject.

“The message I will be getting across (today) is about time management,” said O’Neal. “If they become masters of managing their time, then they can get anything accomplished. I am going to have some fun with them and be in and out. I was once where they were. I had doubts like some of them probably have doubts.”

In both the press conference and in his presentation, he told people about his learning the ins and outs of time management from former LSU All-American Chris Jackson, who was a sophomore when Shaquille came to LSU for his freshman season in 1989-90.

“Believe it or not, I managed my time by watching Chris Jackson,” said O’Neal. “When I was here, I used to follow him. I used to go downstairs into ‘The Dungeon’ and shoot for two hours and then come back and stay in the (dorm) room for a couple of hours and then go out and hang with the fellows a couple of hours. Then I would come back and shoot again. After studying with him and playing with him, I kind of developed my own style.”

O’Neal, who usually makes an annual summer return visit to Baton Rouge and the campus, is in town primarily for the second Shaquille O’Neal Golf Classic Friday morning at Carter Plantation. Some 35 teams will take part in the scramble golf tournament to raise funds for the Shaquille O’Neal CHAMPS Life Skills Program at LSU. For O’Neal having the program named for him is a great honor from a place he still treasures.

“It feels pretty good,” he said. “LSU is my home. It was a place where I made my name and a place where I was able to come here and have fun. It was the best three years of my life. I am also going to talk to the kids about after they leave here, it is a whole new ballgame. While you are here, have fun and become a master of time management. You need to do what you have to do to make it. Work hard. Even though it feels good, I never really envisioned myself coming back to speak to kids at the university where I played. I have been blessed. I just want to give them some insight and let them know they can do it. If I can do it, anybody can.

“This is where I am from. This is what made me who I am. I come here and do the stuff I liked to do when I was in college. I like to feel what it is like to still be in college. The reason I went to the weight room (today) wasn’t just to work out. It was just to feel 18 or 19 once again. I like to just sit back and say I used to do that. If you feel old, you become old. Whenever I start to feel old, I have to go back to my young roots. That puts me back in perspective.”

O’Neal has had a chance to visit with the 2004-05 LSU men’s basketball team. “At this level, there are a lot of guys telling them what to do,” said one of the three members from LSU (along with Bob Pettit and Pete Maravich) on the NBA at 50 team. “I am just trying to be their friends. If they need help, then they can come to me. I was working with Big Baby (Glen Davis). He asked me show him some moves, and I showed him some moves. They looked in good shape. They look like a good team, and they look like a close-knit group. I wish them well, but I have never been the type to say do this or do that. I am just out there hanging with them.”

O’Neal called his relationship with the present-day basketball team and Coach John Brady “a beautiful relationship” and he realizes the expectations on today’s student-athlete.

It was a night that made winners out of all who attended. O’Neal was a winner for giving back to the life-skills program named after him and giving advice to the student-athletes in a style that would catch their attention. It was a night of success for those at the Cox Communications Center for Student-Athletes and the CHAMPS program because they were able to showcase their building and program to the media and get some strong points over to the student-athletes about their future.

For the LSU family, it was a great night to look on the stage and welcome back, Shaquille O’Neal, All-American athlete and graduate of the University.

COMMENTS FROM SHAQUILLE O’NEAL AT HIS WEDNESDAY PRESS CONFERENCE

–On his decision to prepare to leave LSU for the professional basketball ranks
“I watched people. I could have left my sophomore year, but my academic advisors, Mike Mallet and Tommy Karam asked me ‘if you could make dollars, what would you do with it.’ I gave them the juvenile answer. I was going to buy this and buy that. It wasn’t an educated answer at all, which told me that I wasn’t ready to face the world of money, cars, shoes and business people. I just asked to stay one more year and ask questions and take business courses like accounting. After my junior year, I was more mature and knew to take money to the bank, government bonds and stuff like that. Rocket Ismail came out before I did. I thought his plan was pretty good. He had a marketing guy, an agent and a lawyer. What I did was take his format and broke it down. I said I am going to get an accountant, an agent and do my own marketing. He was a successful model to me.”

On what he would tell athletes who move to the professional level —
“Stay focused. There are a million people at other colleges that do the same thing you do and even do it better. You have always got to work hard and work a little harder. You have got to be ready for everything. They just have to know there might be a slight chance that they do not get drafted. They might not become the star that they want to be. It is okay to have something to fall back on.”

On Dwayne Wade and what he will take from his Olympic experience–
“I am sure he is going to feel like he has something to prove. Olympics and the NBA game is a different game. Olympics is more perimeter or zone defense. Our game is more run and gun and play a little bit of defense.”

On Baton Rouge–
“Baton Rouge is the place that helped me become who I am. I will never forget this place. It is natural to come back and get back to my roots. I don’t have any old tapes to show my children. You have to stick with what made you what you are.”

On what he envisioned when he began college–
“I was just happy to be here. I know that I had to humble myself and start all over. I went to high school where I was the man. The whole school was mine. My father told me I was going to have to start all over when I go to college. I came here and had to wait my turn. A couple of games, I didn’t start which was fine with me because I had time. We had a lot of heavyweights here, Chris (Jackson), Stan (Roberts), Vernel (Singleton) and Maurice (Williamson). I had to wait my turn.”