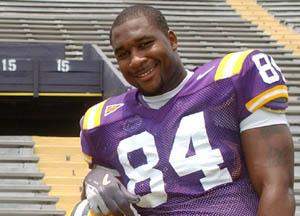 One of Baton Rouge’s favorite sons will finally leave the city at the end of the 2004 season. LSU defensive end Marcus Spears has already achieved all many young athletes can dream of within minutes of his home.

Spears didn’t need to leave his family or his friends to become the champion he is today. But he has made plenty of sacrifices.

Spears began playing football in Baton Rouge at age four, in his front lawn with his father and a Nerf football. He had every opportunity to move away four years ago, when he received numerous Division I scholarship offers to play both basketball and football at some of the nation’s top programs.

SuperPrep magazine rated Spears the No. 1 tight end prospect in America and the No. 3 overall prospect when he was being recruited out of Southern Lab High School. He was also was a highly recruited basketball player and helped lead his team to the state championship game.

Somehow, Spears was convinced giving up those offers would pay off for him when he signed to play for a football program that was still rebuilding a year after head coach Nick Saban arrived.

“I thought there was something special going on here,” Spears said. “When I was taking recruiting visits I realized that the good teams and winning programs were mostly hometown boys staying at their college, like Miami and Florida State. Michigan had a lot of guys from there.”

Another hometown boy decided to stick around with Spears. He and his best friend, Michael Clayton, made LSU’s one of the top-rated recruiting classes in the nation in 2001.

Spears made it clear that football, and not fear of leaving home, made him decide to stay in Baton Rouge. But his father, Pete, was there for him then, too.

“I put my two cents in,” said the elder Spears. “But I also said, ‘This will always be yours.’ I didn’t want him to say ‘I did this because you told me to, and this is what happened.'”

In the end, Pete said the coaching staff and the opportunity to play for Saban and with Clayton was enough incentive to keep Marcus close to home.

Spears was rewarded with generous playing time in his freshman football season, but even that came with a heavy price tag. He originally planned to play basketball for the Tigers after the fall. But football season left him battered, and he made the difficult decision to leave basketball — his first love — behind him.

“He talked with me about it,” Hawkins said. “He told me he was really beat up and sore after the season, and he said he didn’t want to hurt the basketball team. I thought he was very unselfish.”

The second big change of Spears’ first year was perhaps even more difficult. Even his football career would not go the way he envisioned it. He played three positions in 2001, recording the most stats at defensive end.

After the season, Saban proposed a permanent move to defense. Spears was not initially thrilled with the idea.

“Tight end was something I had done most of my life,” Spears said. “I thought that was my position and that’s what I would hopefully play when I got to the next level. But Coach Saban saw it differently.

“We had our time with it. I was young and not willing to accept the responsibility of making the change. But it’s worked out for the best. Everything he told me would come out of it has come.”

Spears quickly excelled in his new role on defense. He started all 12 games his sophomore year despite nagging injuries late in the season, recording 46 tackles and two interceptions.

And everyone knows what happened in 2003. Spears was a leader on the most feared defensive line in the country with Marquise Hill, Chad Lavalais and Kyle Williams.

His third quarter interception against Oklahoma’s Jason White allowed him to score the game-deciding touchdown in the BCS National Championship Game.

Spears’ stock soared when the season was over and he became eligible for the 2004 NFL draft. Experts projected him to be a late first-round or early second-round pick. His friends Lavalais, Hill and Clayton left for the NFL.

But Spears resisted the temptation, and instead he sacrificed a year of his professional career to finish what he started, where he started it.

“I just feel like there are still great things going on here. I made a four-year commitment and I’m going to stick to that,” Spears said just minutes after teammate Matt Mauck announced he, too, would enter the draft.

The extra year would allow Spears to finish his degree requirements, and to become even more attractive to his future employers.

Marcus’ mother, Irma, tried to let him make his own decision. But she had already paved the way to make education a priority. Irma is in the process of earning a master’s degree 30 years after she completed her undergraduate work.

“I think Marcus knew the things he wanted to accomplish,” she said. “He realizes that in order to accomplish some things you have to sacrifice.”

Spears expects to gain much from being one of the team’s senior leaders.

“Those other guys are my good friends, still,” he said of his former teammates. “I’m happy for them. They were prepared to take that step. But I’m 21. I would have gone into the league at 21 years old — kind of young. I still have a lot of work to do.”

At a family funeral earlier this year, Marcus Spears was introduced to a cousin he had never met before.

Pete had not seen his first cousin, Roosevelt, in 35 years. He had to re-introduce himself, his mother and his wife to his relative.

But Roosevelt immediately recognized Marcus, whom he had seen in the newspaper just days before.

“He knew Marcus because he was here at LSU, not because that was his cousin,” Pete said. “He recognized his number, 84. I told Nick (Saban) the other night, ‘I guess some things make everything worth it.'”

Next year, Spears will have to move away from Baton Rouge for the first time in his life. Though he plans to come back some day, he knows he’ll be able to accomplish even more elsewhere.

“It’s going to be exciting,” he said. “This is home to me. I’ll never be able to repay the people around here who have helped me, but I’ll go and do my job. I won’t be focused on missing things. It’s just an adjustment you have to make to become a man.”

Spears will have to finally sacrifice his hometown for his career after this year, but, as he has learned, sacrifice can be a great thing.