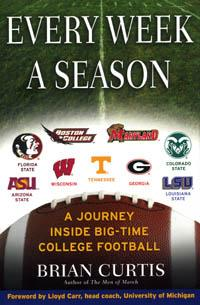 BATON ROUGE — College football fans from across the country will get an inside look of what it’s like to be part of the LSU football team with the release of  a book titled “Every Week A Season: A Journey Inside Big-Time College Football”.

Written by Brian Curtis, the book takes a behind-the-scenes look at some of college football’s top programs. Curtis, who is currently a reporter and broadcaster for College Sports Television, spent two weeks with LSU during the 2003 season, including the days leading up to the Tigers’ national championship win over Oklahoma in the Nokia Sugar Bowl.

Curtis joined LSU for the first time the week of the Auburn game, a contest that LSU won by a 31-7 margin in Tiger Stadium. Curtis shares some of his thoughts and insight after spending a week of looking in on team meetings and coaches meetings as the Tigers prepared for Auburn in late October.

LSU fans will get also get a chance to see how the other side prepares for a game against the Tigers as Curtis spent the week of the SEC Championship game with coach Mark Richt and the Georgia Bulldogs.

The book retails for $24.95 and is currently in bookstores across the state of Louisiana. Curtis, who also authored, “The Men of March: A Season Inside The Lives Of College Basketball Coaches”, will be in Baton Rouge on Friday for a book signing at 6 p.m. at the Barnes and Noble located at 2590 Citiplace Court.