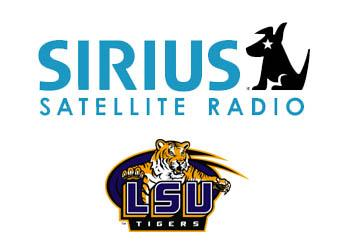 Sirius College Sports Radio is a comprehensive package of play-by-play sports programming representing top-ranked colleges from around the country.

“LSU is excited to be joining Sirius College Sports Radio and to bring the Tigers to fans all over the country through this medium,” said LSU athletics director Skip Bertman. “The LSU Sports Network is already one of the most powerful college sports radio networks in the nation, and the addition of Sirius only adds to our ability to reach Tiger fans and to grow our fan base.”

“College sports played an important role for many students,” said Scott Greenstein, Sirius President of Entertainment and Sports. “This agreement opens the doors for students, fans and alumni to follow their school throughout the season.”

“Sirius College Sports Radio is a huge victory for college sports fans who follow these great teams all year long,” said Chris Bevilacqua, Executive Vice President and Co-Founder of CSTV. “Fans will have the opportunity to enjoy games all season, from the top athletic programs in the country, whether they’re in the car, in their dorm rooms, at home or sitting in their yards.”

Sirius is also the Official Satellite Radio Partner of the NFL, featuring a programming package that brings subscribers live broadcasts of every NFL game. Other Sirius programming offerings include 65 channels of 100 percent commercial-free music, news from CNN, Fox News Channel, NPR, CNBC and Bloomberg; 12 channels of call-in talk programming and traffic and weather for 20 major cities across the country.

Sirius radios for car and home are available at major retailers nationwide. Radios are available for $149 and monthly subscriptions cost just $12.95, or less when paid on an annual basis. For more information, go to www.sirius.com.