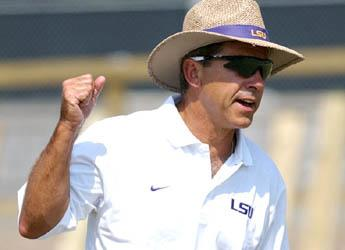 BATON ROUGE — A mid-afternoon thundershower chased LSU indoors Friday as the squad held a two-hour workout at the Charles McClendon Practice Facility as the Tigers began to prepare for Oregon State.

The Tigers open their season on Saturday, Sept. 4 at 5 p.m. in a sold-out Tiger Stadium against Oregon State. The game will be televised to a national audience by ESPN.

“We got going on Oregon State today for the first time, and I was pleased with the attitude that the players had and the way they tried to get after it,” LSU coach Nick Saban said following Friday’s practice. “We’ve got a lot of prepping to do on both sides of the ball and on special teams. I’m anxious to continue to get ready and to try to get our players ready. I think the players are happy to get the opportunity to get ready to play a game.

“We have a lot of respect for Oregon State. I think they were arguably one of the best teams in the Pac-10 at the end of the season last year. They threw for 485 yards on Southern Cal last year and they led the league on offense and they’ve got a lot of good football players.”

Saban singled out Oregon State quarterback Derek Anderson, who threw for 4,058 yards and 24 touchdowns in 2003, calling him a “a very good player.”

Friday’s workout was the first real practice session for the Tigers since Tuesday’s scrimmage. The Tigers held a light workout on Thursday after taking Wednesday off. Saban said that he was pleased with the team’s progress after reviewing the film of the scrimmage.

“After watching the scrimmage film I thought that we made a significant amount of improvement from the first scrimmage to the second scrimmage, which was good, especially in consistency,” Saban said. “The effort was better and I think we had more guys playing hard and competing like we’d like. I still don’t know if we have enough, but we’re making progress toward it.”

“I think guys are learning from some of the other guys what’s expected of them here. There are some things that young players are just only going to get from getting some game experience, and we are going to do the best we can and help prepare them so that they can take advantage of their opportunities when they get into the game. We were better in a lot of areas in the scrimmage, and hopefully we’ll continue to make progress this week.”

“Skyler’s walking around and will probably be ready go by Monday or Tuesday,” Saban said. “You’ve got to play those things kind of by ear, but that’s kind of the prediction at this point.”

Saban said freshman wide receiver Xavier Carter (ankle) is back practicing after missing time in the last scrimmage with an ankle injury.

The Tigers will practice at 3 p.m. on Saturday and will then take Sunday off heading into the first week of the season.