Football Equipment to Travel First-Class in 2004 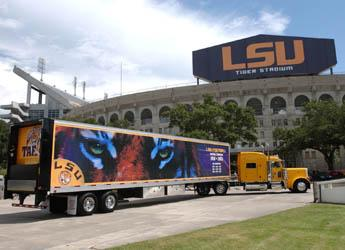 BATON ROUGE — When the LSU football team hits the road for a game, the squad travels in style, chartering jets and getting police escorts to and from the stadium. Now, thanks to the Tiger Athletic Foundation, LSU’s football equipment will get first-class treatment as well as a 2004 custom-designed Peterbilt tractor-trailer will transport the Tigers’ equipment to each road game.

Doubling as an LSU billboard on wheels, the purple and gold tractor-trailer is designed with features such as a Bengal tiger, an LSU football helmet along with a listing of the school’s national championships and Southeastern Conference titles in football.

Perhaps the most intimidating feature on the trailer is a set of Tiger-eyes, which occupy nearly the entire right side of the trailer.

The tractor portion of the billboard on wheels is being leased by LSU from PAC-Lease/Peterbilt of Louisiana. The trailer, officially called a Trailmobile, was purchased by the Tiger Athletic Foundation from Jackson Truck and Trailer for about $40,000.

The graphics for tractor-trailer were designed by the publications office in the LSU Athletic Department and installed by Color-1 graphics.

The truck will be used during football season for LSU’s away games and will transport all of the Tigers’ equipment to each road site, which totals approximately 40,000 pounds each week. In year’s past, the Tigers would lease a tractor-trailer or a Ryder truck to haul their equipment.

“The idea for the truck began with Donny Bohn from the Tiger Athletic Foundation after seeing the truck that Oklahoma brought to the Sugar Bowl last year,” LSU equipment manager Greg Stringfellow said. “There’s always been a need for more space to travel with because of the quantity of equipment we bring to and from games and now we have all the space we need, while promoting LSU at the same time.”

Stringfellow said that Tennessee and Florida each have its own tractor-trailer, but LSU is the first school in the league to have one custom-designed in its school colors.

The LSU tractor-trailer will hit the road for the first time when the Tigers travel to face Auburn during the third week of the season.