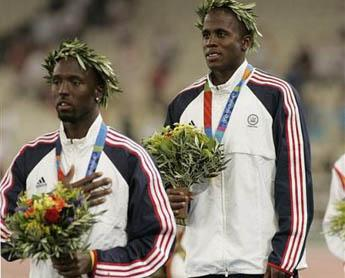 ATHENS, Greece — Former LSU track and field standout John Moffitt capped off a sensational 2004 season Thursday, winning silver as part of the United States’ 1-2 finish in the long jump at the Olympic Games.

Moffitt soared a personal best 27-9 ? on his fifth attempt of the day to jump from fourth to second in the standings, passing Spain’s Joan Lino Martinez (27-3 ?) and Jamaica’s James Beckford (27-3 ?).

“You just can’t beat that, USA going one-two,” said Moffitt. “It has been a long journey though, we worked hard for this and Dwight Phillips is a great competitor. He went out there and did it on his first jump. I just continued to work hard and came through on my fifth jump and won the silver medal.”

Dwight Phillips, the reigning world champion, bettered Moffitt’s mark by just over four inches to win the gold with a distance of 28-2 ?.

“John was able to stay calm and keep his composure which allowed his to execute the game plan,” said LSU assistant coach Boo Schexnayder. “John never had a bad jump during this competition. He remained consistent and that put him in position to hit big when he needed to.”

“John has been focused and ready to do this since the first day he got here,” LSU head coach Dennis Shaver. “Boo (Schexnayder) did a great job of coaching him and helping him remain focused.”

It was Moffitt’s ability to treat this meet just like any other that Shaver believes was a key component to his success.

“I know John’s never competed in front of 60,000 people before, but he didn’t let that affect him,” said Shaver. “He was able to stay focused and jump a personal best. You can’t ask for anything better than that.”

“It’s just really great to see someone like John, who works so hard, get what they deserve,” added Shaver.

With the medal, Moffitt became the second athlete with Tiger ties to stand atop the awards stand in Athens. Derrick Brew won bronze in the 400 meters Monday.

Moffitt and Brew are the first American track athletes with an LSU connection to win individual medals since 1936 when Glen “Slats” Hardin won gold in the 400-meter hurdles.

Action from Olympic Stadium and the 2004 Summer Games continues Friday.

Long jump gold medalist Dwight Phillips, right, and silver medalist John
Moffitt, both of the US, wrap themselves US flags following the
competition at the 2004 Olympic Games in the Olympic Stadium in
Athens, Thursday Aug. 26, 2004. (AP Photo/Mark Baker)

Dwight Phillips, right, of the U.S. celebrates after winning the gold
medal in the long jump with teammate John Moffitt, left, who won the
silver medal, at the 2004 Olympic Games Thursday, Aug. 26, 2004 in
Athens, Greece. (AP Photo/Ben Curtis)

John Moffitt of the US hits the sand on his way to winning the silver
medal in the men’s long jump final at the 2004 Olympic Games in the
Olympic Stadium in Athens, Thursday Aug. 26, 2004.
(AP Photo/Thomas Kienzle)