Bernard Ninth in Decathlon, Three Others Advance to Finals 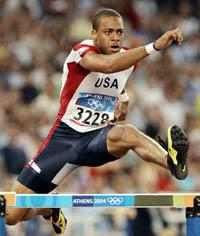 ATHENS, Greece — Claston Bernard finished ninth in the decathlon and Bennie Brazell, John Moffitt and Muna Lee all advanced to the finals in their signature events Tuesday at Olympic Stadium, completing another successful day of competition for current and former LSU athletes at the 2004 Summer Games.

Bernard, representing Jamaica, cleared a personal best 14-5 1/4 in the pole vault en route to a 3,817 point second-day total. He finished the meet with 8,225 points.

Tiger senior Bennie Brazell continued his successful run in the 400-meter hurdles. The 10-time All-American automatically advanced to Thursday’s final after finishing second in his semifinal heat with a time of 48.19.

Former Lady Tiger Muna Lee moved on as well, qualifying to the finals in the 200-meter dash. Lee took the field’s eighth and final spot, placing fourth in her semifinal heat with a time 22.69.

In the field, former Tiger John Moffitt needed just two jumps to secure a spot in the long jump finals. The two-time NCAA champion and six-time All-American jumped 26-9 3/4 on his final attempt of the afternoon to advance with the field’s fifth-best mark.

Walter Davis also participated in the qualifying rounds of the long jump, but failed to move on after jumping just 25-7 1/4.

Action for the Olympic Games will continue Wednesday as Lee runs for gold in the finals of the women’s 200-meter dash.

John Moffitt of the US competes in the men’s long jump at the 2004 Olympic Games at the Olympic Stadium in Athens, Tuesday Aug., 24, 2004. (AP Photo/Thomas Kienzle)

Walter Davis of the US hits the sand, as he competes in the men’s long jump at the 2004 Olympic Games at the Olympic Stadium in Athens, Tuesday Aug., 24, 2004.(AP Photo\Thomas Kienzle)