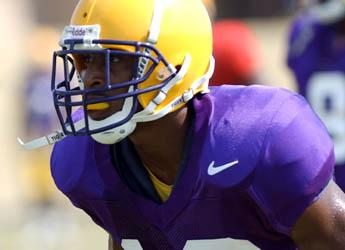 BATON ROUGE — LSU coach Nick Saban liked what he saw out of his football team on Tuesday as the Tigers held their final scrimmage of fall camp in Tiger Stadium.

The Tigers will take Wednesday off, their first day without football since reporting to camp on August 8. LSU will hold a light workout on Thursday and then begin their preparations for Oregon State on Friday.

Tuesday’s scrimmage had the Tigers spending the majority of the workout on “moving the field” in a simulated game with additional time spent on third-down situations, red zone opportunities as well as the two-minute drill.

“I saw a lot more improvement today, especially offensively,” Saban said following the scrimmage. “I thought we moved the ball a little more effectively and with a little more consistency, especially with our ability to throw it.

“I thought the quarterbacks were much more efficient and effective today. Marcus Randall did extremely well as did JaMarcus Russell and Matt Flynn. I don’t see any difference in where we’re going with the quarterbacks right now, relative who’s where on the depth chart.”

Saban did express his concern in LSU’s lack of running ability during the scrimmage, the second time in which the Tigers struggled with the ground game.

“There’s still a little bit of concern that we weren’t able to run the ball effectively,” Saban said. “We just can’t seem to get it on track like we’d like to. We need to be able to (run) because I think that balance to go with the kind of play-action passing like we’d like to have is critical to the success of our team.”

As for the wide receiving corps, Saban singled out sophomore Dwayne Bowe and freshman Early Doucet for their performance on Tuesday. Bowe led all receivers with six catches, while Doucet “had a couple of nice catches”, according to Saban.

Saban also added that “I didn’t see us drop passes and we made some nice catches in traffic.”

Defensively, the Tigers allowed a pair of touchdowns through the air, but did not yield a rushing TD.

“We did okay on defense,” Saban said. “We gave up a couple of plays that we probably wish we wouldn’t have or could have done a little bit better. Overall it was pretty good play with the ones (first unit).

“The important thing is we don’t have a critical mass of guys yet on this team that are where they need to be from a maturity, character, and attitude standpoint to be able to have the kind of mental toughness, discipline, and ability to execute that we need going into the season.

“I think it’s critical that we have some players who need to step it up a notch for us to have the kind of football team that we’re capable of. Mostly it’s the younger, more inexperienced players that we need to get that from. I think it’s going to come with knowledge and experience and making mistakes and learning from them.”

Saban also praised the performance of placekicker Chris Jackson, who was a perfect 4-for-4 on field goal attempts, which included drilling a 56-yarder into the wind.

“Chris kicked extremely well today,” Saban said. “He also did a good job with his kickoffs.”

Saban said the Tigers had two players suffer minor injuries in the scrimmage as wide receivers Skyler Green and Xavier Carter both twisted ankles during the workout. Saban said both players are expected to be back in a couple of days.

Petty and Steltz Get Scholarships
LSU coach Nick Saban announced on Tuesday that sophomore snapper Gant Petty and junior fullback Kevin Steltz have each been awarded an athletic scholarship for the 2004 season. Petty serves as LSU’s deep snapper on punts, while Steltz is in a battle for the starting spot at fullback. Both players had significant roles in LSU’s run to the national title last year.