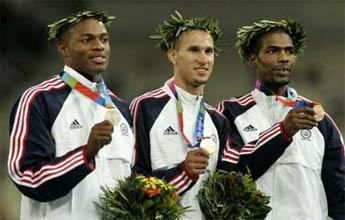 ATHENS, Greece — Former LSU Tiger Derrick Brew was part of 1-2-3 American finish in the 400 meters Monday at the Olympic Games, taking home bronze behind a season-best effort of 44.42 seconds.

Brew was bettered only by teammates Jeremy Wariner and Otis Harris. Wariner clocked a personal-best 44.00 to take home the gold, while Harris, also posting a personal best, finished in 44.16 to win the silver.

Finishing just out of the medal hunt was world champion and former Tiger Alleyne Francique of Grenada. Francique clocked 44.66 to place fourth overall.

Brazell breezed through the opening round of the men’s 400-meter hurdles automatically advancing to the semifinals with a second-place finish in his heat. Brazell’s time of 48.57 was the third fastest qualifying mark of the day.

Lee, who finished her LSU career in June as the most decorated track and field athlete in school history, was sensational in advancing to Tuesday’s semifinals in the 200 meters. Lee won both her first round and quarterfinal heats with times of 22.57 and 22.79, respectively.

In the field, former NCAA champion and Tiger standout Claston Bernard was impressive in the first day of the decathlon competition. Bernard, competing for Jamaica, posted personal-best marks in three of the five events to finish the day in sixth place with 4,408 points.

Bernard will wrap up the decathlon tomorrow, competing in the 1,500 meters, 110-meter hurdles, discus, pole vault and javelin.

Also in action Tuesday at the Olympic Stadium will be Walter Davis, John Moffitt and LeJuan Simon in the first round of the men’s long jump, as well as Brazell and Lee in the semifinals of the 400-meter hurdles and 200 meters, respectively.