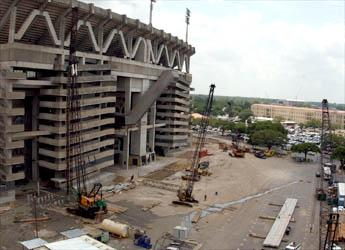 BATON ROUGE — In preparation for the 2004 LSU football season opener on September 4, LSU is advising fans to be aware of pedestrian walkway changes in relation to on-going construction at Tiger Stadium during the coming season.

Most of the parking lot adjacent to the west side of Tiger Stadium, known as Lot A, has been fenced off to create a construction zone. LSU has created walkways on the north and south ends of the construction area, called Portal A and Portal B, to accommodate fans who sit on the west side of the stadium.

“We estimate that about 33,000 fans use the gates that are obstructed by the construction fence,” said LSU athletics director Skip Bertman. “We hope our fans will become familiar with the new passageways we have created, will go to their seats early and will be patient as we deal with this issue for the 2004 season.”

LSU has set out a plan designed to allow fans to enter the stadium in an efficient manner with safety and comfort being primary factors. LSU has established a website at www.LSUsports.net/westside to provide fans with information and diagrams on how to best reach their seats.

The centerpiece of the plan involves two main portals in which fans will enter if they have tickets for Gates 1 through 5 or Gates 15 through 17. Portal A will be located on North Stadium Drive between Tiger Stadium and the Athletic Administration Building. Portal B will be located on South Stadium Drive on the southwest corner of the stadium. Complete diagrams are available on the website.

Tickets will be taken at the Portals, not at the stadium entrance where fans have presented tickets in the past. This is being done to move pedestrian congestion away from the stadium and out into more open areas of the grounds around Tiger Stadium.

The escalator on the west side of Tiger Stadium has been removed to accommodate the construction schedule. LSU is installing four passenger elevators similar to ones used at the last Winter Olympic Games. Fans will queue up outside the elevators and will be assisted by LSU game marshals who will be on hand to assist fans entering and exiting the elevators.

LSU has taken several other measures to help alleviate some of the anticipated waiting time and congestion:

LSU opens the 2004 season against Oregon State on September 4 at 5 p.m. Central. The game will be televised by ESPN.