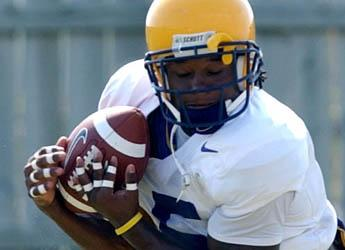 The Tigers were scheduled to practice again at 7:30 p.m. on Saturday, the last two-a-day session in camp for the squad. LSU will practice at 3 p.m. on Sunday with another workout scheduled for 3 o’clock on Monday, the first day of school on campus. LSU will hold its final scrimmage before the season-opener on Tuesday afternoon in Tiger Stadium.

“I have been pleased and pretty impressed, especially offensively,” Saban said. “I think in the last couple of days we have really started to make some progress on offense. It just seems like things are falling into place for us a little bit.

“We feel like we are a little sharper in what we are doing, throwing and catching the ball better. I have been pleased all around with our intensity and attention to detail. I think we are kind of responding like you would like for the offensive players to respond to try to get better. That doesn’t mean we are not trying to do it on defense, but I am just saying that we are pleased with what has happened.”

Saban said he continues to be impressed with all three quarterbacks in camp, including senior starter Marcus Randall.

“I’ve been really impressed with all three guys,” Saban said. “We’re going to have to make a decision shortly and make somebody the backup. Somebody is going to have to get some reps and some game experience early in the season.”

Saban said Tuesday’s scrimmage will go a long way to determining who the backup quarterback may be. In addition, Saban said he hopes to use the final scrimmage to answer questions at several other positions, including offensive guard, wide receiver and sam linebacker.

“We need to solidify who’s doing what and where at offensive guard,” Saban said. “We’ve been doing a lot of flip-flopping with guys there.

“We also need to establish who the starters are at wide receiver and who is going to be our third and fourth receiver.”

Ingram Leaves Squad
LSU redshirt freshman linebacker Darius Ingram has left the squad. Ingram, a native of Tenaha, Texas, redshirted in 2003 as a true freshman for the Tigers.

“Darius Ingram is a fine young man and great for the program,” Saban said. “We really did not want him to leave because of the kind of person that he is, but he’s very close to his family and he really wanted to get closer to home for personal reasons. He is a good student with great character and would have been a great player here. We certainly wish him well wherever he goes.”

Saban Congratulates Baton Rouge’s Carly Patterson On Olympic Gold Medal
LSU coach Nick Saban spent a portion of his post-practice meeting with the media on Saturday to congratulate Olympic gold medalist Carly Patterson, who is a native of Baton Rouge. Patterson became only the second American to capture a gold at the Olympics in the all-around. She joins Mary Lou Retton as the United States’ gold medal winners in the all-around at the Olympics.

“I’d like to personally congratulate Carly Patterson and her family for the outstanding performance in gymnastics and winning the all-around,” Saban said. “It is kind of interesting that last time that was done came in 1984. Mary Lou Retton was from my hometown in West Virginia and now the next person that wins the all-around is from the town I am living in. It is kind of unusual and coincidental. I saw some of the floor exercise, but am very, very proud of what she has accomplished. I know the kind of hard work, dedication, perseverance and commitment that kind of performance and standard of excellence takes.”