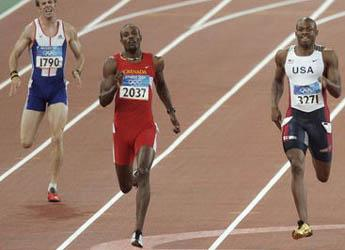 ATHENS, Greece — Former Tiger track and field standouts Derrick Brew and Alleyne Francique each advanced to the finals in the men’s 400 meters Saturday at the Olympic Games.

Brew earned an automatic bid after winning his heat in 45.05. Francique, competing for his native country of Grenada, earned an at-large bid, placing third in his heat with a time of 45.08.

Brew and Francique qualified into Monday’s final with the sixth and seventh fastest times of the field respectively. The United States’ Jeremy Wariner leads the quartermile contingent after clocking a meet-best 44.87 in the semis.

In action in the women’s 400 meters were senior Hazelann Regis and former Lady Tiger All-American Nadia Davy. Regis, representing Grenada, advanced to the semifinals after recording a time of 51.66 to finish third in her heat and 20th overall.

Davy, competing for Jamaica, missed the semifinal cut by just one spot, placing 25th with a time of 52.04.

Fellow Jamaican native and former Lady Tiger Debbie Parris saw her first action of the Games in the 400-meter hurdles. Parris qualified to the semifinals with a time of 55.21 to place 15th overall.

Guyana’s Marian Burnett had her Olympic experience come to an end in the 800 meters. She clocked 2:02.21 to place 22nd in the semifinal round.

Action from the Olympic Stadium and the 2004 Summer Games will continue tomorrow. Former Tiger great Walter Davis will take a shot at the awards podium in the finals of the triple jump, while Regis and Parris will compete in the semifinals of the 400 meters and the 400 hurdles respectively.