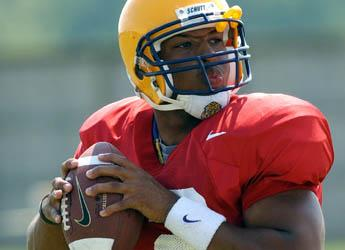 BATON ROUGE — After holding only one practice on Wednesday, LSU went back to work with a pair of workouts on Thursday as the Tigers continue to prepare for the Sept. 4 season-opener against Oregon State.

LSU practiced at 9:30 a.m. on Thursday and followed that with a 7:30 p.m. workout. LSU is scheduled to practice once on Friday followed by its last two-a-day session on Saturday. LSU will workout once on Sunday and then resume its in-season schedule on Monday with the starting of the fall semester.

“I thought we had a much better practice this morning,” LSU coach Nick Saban said. “I think the tempo was very good. Offensively we have made some progress in the last couple of practices and I’m pleased with the way we’ve competed out there. I think it’s important that we go out there and challenge each other every day.

“I know the players probably get a little tired of that but it makes us better to practice ‘good guys’ against ‘good guys’. Now the bad news is somebody’s got to win and somebody’s got to lose and how does that affect your confidence and your ability to develop. I think as long as you look at it as challenging each other and getting better as a team, then it’s the other team that we want to gain the respect from, not individually but collectively as a team.

“Hopefully we’re getting there. I was encouraged today by some of that. It was one of our better practices. We had a lot more spirit and we were more upbeat and I think that was a positive for us offensively. We’ve been trying to establish a tempo, and with so many young guys especially in skill positions that takes a little bit and it’s slowed us down some. I was impressed today that we made less mental errors and had better execution overall. Things were good that way.

Saban added that freshman offensive lineman Herman Johnson, who has missed the entire fall camp with an infection after a bug bite, could be back at practice as early as Monday.

“”We had a positive report on Herman Johnson,” Saban said. “They (the doctors) feel like he’s doing really well now and he’s actually out and about. That’s going to be a real positive for him and for us.

“From and injury standpoint I don’t think we’ve had a lot of other guys out. We have some bumps and bruises like we always have at this time of the year but we’ve got most people taking turns and trying to make improvement.”

“I think wide receiver is where his heart is,” Saban said. “It’s a little easier for him to develop more quickly at wide receiver than it is playing defensive back.”

“Marcus did extremely well in the scrimmage (on Tuesday),” Saban said. “He’s showing a lot of maturity, leadership and he’s created a lot of stability for us on offense.”