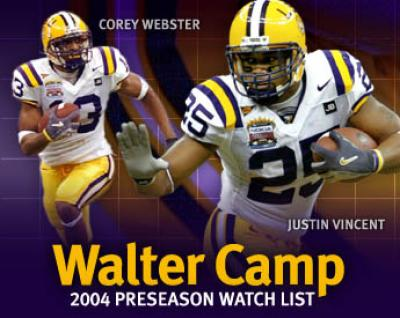 BATON ROUGE — LSU senior cornerback Corey Webster and sophomore running back Justin Vincent are among 40 players from across the country named to the Walter Camp Player of the Year preseason list, the award announced on Thursday.

The Walter Camp Player of the Year, which is voted on by the 117 Division I-A head coaches and sports information directors, will be announced on the ESPN/Home Depot College Football Awards Show in December.

Webster, a native of Vacherie, La., enters his third season as a starter on defensive for the Tigers. In three years with the Tigers, Webster has intercepted 14 passes, which ranks second on LSU’s all-time list. Webster started his career on offensive, playing in 12 games as a freshman at wide receiver with seven receptions for 74 yards.

Webster is also named to preseason award watch list for the Jim Thorpe Award, which goes to the top defensive back n college football.

Vincent, a sophomore from Lake Charles, burst on the scene last year as a true freshman to rush for 1,001 yards, including 201 against Georgia in the SEC Championship Game. Vincent followed that with 117 yards and a touchdown in LSU’s 21-14 win over Oklahoma in the BCS National Championship Game.

Vincent enters the 2004 season also listed on the preseason watch list for the Maxwell Award, which is presented annually to the top player in college football.