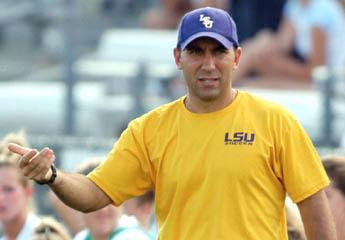 BATON ROUGE — Co-head women’s soccer coaches Danielle and George Fotopoulos addressed the media Wednesday afternoon in a round table discussion on the fifth floor of the athletic department building. The coaches discuss the upcoming season and answered several questions concerning their team.

“It’s the early year, and we’re doing good in preseason right now, ” said co-head coach Danielle Fotopoulos. “The girls came in fit, ready to go, however, we’re working on a new system for us, a 4-4-2. We’re just piecing that together. We’re not for sure going with that system, but we’re just making sure it’s what we want to do and how we want to get all of our team on the same page. Everybody came to prepare and it’s been better than it has in the past, so we are looking forward to starting off with a bang.”

The Tigers will continue to practice up until their Aug. 27 game. They will also hold an intersquad game this Saturday at 10 a.m.

QUOTES FROM THE ROUND TABLE

About this being a make or break season for women’s soccer: (by George Fotopoulos)
“We play in the second best soccer conference in the country and of the four years that I’ve been here, we’ve been to the SEC Tournament twice and those have been really good experiences for us. Obviously in our second year, we upset the No. 1 seed Auburn and I feel that year we were really overlooked by the NCAA selection committed. We beat Florida State, who a year after ended up in the Final Four. We beat Auburn, who had won the conference title. We had been in the top 25. We had beaten Ole Miss at Ole Miss. I was really disappointed in the selections committee’s opportunity to overlook us because maybe some of our out of conference schedule was poor. When it came down to head to head and who we had to play I thought we did very well. I thought that year kind of hurt us because I fell that if we had gotten into the NCAA Tournament it would have really turned our program and gotten it where I thought it would be in this fifth year. I’m not saying we’re not here, but there’s no question this is a make or break year, not only for our program but we’re at a school right now where the bar has been raised above and beyond, higher than it has ever been raised before. Coach Saban and women’s basketball and softball, just to name a few sports, have raised the bar high and for us not to make it into the postseason would be very disappointing for us.

On the addition of Carolina Vanderpool to the team and her involvement in the FIFA U-19 Women’s World Championship: (by George Fotopoulos)
“As a coach, you can look at it one of two ways. You can be selfish and say, my team comes first and we have to win, or you can say, what’s best for the girl and the player. What’s best for Caroline Vanderpool is also what’s best for the team. Caroline going to the youth World Cup Youth World Cup is a tremendous honor, not many kids get to go and do that. Not only is she doing it as a U-19, but this team also beat the United States, which is the reigning World Champions in that age group. This team that Caroline is on is a special team and she spent a lot of months and a lot of hard times training for this team and for me as her college coach to take this opportunity away from her would be a travesty. I respect the fact that she called me and it showed a lot of professionalism that she was willing to communicate with me and let me know her feelings about it and Danielle worked very closely with her national team coach and as it looks right now, she will miss some time in the beginning but we feel comfortable that we have some depth in that position to help us out while she is gone. The down factor is that if everything goes well and we do make it into the SEC Tournament and the NCAA Tournament, Caroline will not be with us for that postseason run and that’s a bit disappointing, but at the same time I know that if we do get to that point that she will have been a big part in that. So, we look forward to contributing tremendously for us this year.”

On the addition of Danielle Fotopoulos as co-head coach to the staff: (by Danielle Fotopoulos)
“It’s going to be different just because last year I was a volunteer coach and I had certain restrictions as a volunteer in recruiting and I think my role in contributing to the team. As a volunteer coach I limited myself because there were other coaches that put their input to the team so I think I am involved a lot more in the decision making of the players and too, my activity with them personally is much more involved and of course with recruiting. I take a huge responsibility in recruiting of our program. In that aspect I don’t know how much it was different. That’s some of the strengths that I bring to the team. Being able to see a different level and playing at a higher level and trying to bring that into the girls with just my experience and where I’ve been and where I’ve played and really try to encourage them and motivate them to want to be at that level and to try to want to be in the NCAA Tournament and want to break into the final stages of play and of the competition and bring the mentality to that.

(by George Fotopoulos)
“Danielle is sitting next to me and is basically a knee injury away from being in Athens right now with the women’s Olympic team. I don’t think our girls sometimes realize just how lucky they are to have Danielle to our staff, one of the greatest forwards to ever play in this country. Probably one of the top forwards in the world when she was playing in the WUSA. The reason I kind of gave that resume is because that that credibility comes to LSU now. When recruits look at LSU now, they don’t look at Tiger Stadium, they don’t’ look at anything else, they look at Danielle Fotopoulos — Women’s World Cup champion, WUSA champion — and that’s going to open a lot of doors for us. So right away the big change is in the recruiting. We’re able to recruit now kids that we never, ever able in the past to recruit. The on the field difference is obviously our total coaching personalities. In the past with Ricky (Zambrano – assistant coach) mostly focused on goalkeeping and lot of the defensive things and I think the difference is going to be allowing Danielle to really use her expertise in the offensive scheme of things to really help out our offense where as in the past I did that. So, I feel like my staff has gotten a lot stronger from a recruiting standpoint and definitely from an on the field coaching stand point. I think the major differences are as before maybe we didn’t have a staff that was nationally very much recognized, and that’s not a knock to Ricky or I. The biggest difference is going to be the expectations of our program from the people outside looking in are going to be a lot higher because Danielle is on our staff so not only do we have expectations for postseason but everyone expectations in the soccer world is going to be that Danielle’s impact on our program is going to very quick and very immediate and be very great.”