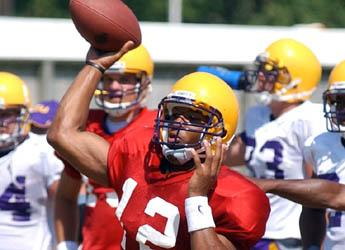 BATON ROUGE — LSU coach Nick Saban was pleased with the effort of his squad on Tuesday as the Tigers went through their first scrimmage of the fall here in Tiger Stadium.

“I was pleased with the first scrimmage,” LSU coach Nick Saban said following the workout. “We had a lot of good things out there on the field. There was some good hitting and some good hustling.

“We were primarily looking for guys who would get out there and compete. We know we’ve got some young guys that are going to make some mistakes. We didn’t want them to worry about messing up but we wanted to get them to focus on trying to create the things they’re capable of creating by playing hard and being aggressive. I saw some players do that today and those are the kinds of guys we want to invest our time in to coach for the future.”

The Tigers used a large part of the scrimmage dedicated to game-like situations with a moving field. In addition, LSU spent time working on third-down situations, red-zone opportunities as well as the two-minute offense.

“I didn’t think our consistency was what it needed to be probably in any part of what we did,” Saban said. “Offensively, I didn’t think we ran the ball as well as I thought we could. Relative to our offensive line and running backs, we were okay but made a few plays that were kind of broken plays.

“We didn’t really throw the ball with the consistency that we need to on offense so I think that we’ve got a lot of work to do, not in terms of being able to make plays but in consistency in making plays and sustaining drives and third-down situations.”

Saban said that senior quarterback Marcus Randall took “75 percent” of the snaps with the first unit with freshman JaMarcus Russell getting the other 25 percent of the snaps. Russell and freshman Matt Flynn each split time with the second unit.

“I think the quarterbacks did some good things,” Saban said. “Obviously, we have things to work on. The consistency in the passing game is not what it needs to be, but it wasn’t just about them. We got sacked too many times. We had pressure too many times and we had too many dropped balls.

“Many times I’ve said that being an effective passing team is about the whole team, not just about the quarterback and how he throws it. He has to be protected and we have to handle the blitz. We have to catch the ball with consistency and we have to make some plays after we catch it and those are all thinks I think we need to improve on. We’ve got a lot of young players in some of those positions so I’m sure they have the kind of capabilities they need to make the improvements they need.”

Saban added that he was pleased with the defensive unit despite giving up a couple of big plays towards the end of the scrimmage.

The Tiger defense played without starting strong safety Jessie Daniels, who was out with a sprained ankle. In addition, backup offensive lineman Will Arnold (concussion) along with Herman Johnson and Michael Schultz all missed the scrimmage.

The Tigers return to practice with a 3 p.m. workout on Wednesday followed by a pair of practices on Thursday. LSU’s final scrimmage of fall camp will take place next Tuesday.