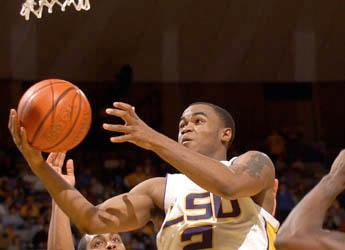 The schedule is still pending approval by the LSU Athletic Council and game times and television dates are still to be announced by the Southeastern Conference.

LSU will play 16 regular season games and two exhibition games at the Pete Maravich Center during the 2004-05 season and on paper the schedule has several challenges for a Tiger team that looks to make post-season play for the fifth time in the last six years as Brady enters his eighth season as the LSU men’s head basketball coach.

“This year’s basketball schedule is certainly the most challenging schedule since I have been at LSU,” said Brady. “We face teams from the Big East (West Virginia-Nov. 27 in Baton Rouge), Big 10 (Ohio State-Jan. 15 in Baton Rouge), ACC (Florida State-Dec. 30 in New Orleans) and Mountain West (at Utah-Jan. 3) among others this year, along with the always challenging SEC slate. Our team and coaching staff are excited about the challenges our schedule provides us and we feel our fans will get the chance to see the Tigers play some very good teams during the course of the season.”

The season opens with an LSU-hosted tournament featuring Louisiana schools that will be played on Nov. 19 and Nov. 21 around the LSU hosted Ole Miss football game at Tiger Stadium on Nov. 20, making for a complete sports weekend for LSU fans. The Tigers will face rival Tulane in the opening round with Louisiana Lafayette and Louisiana Tech meeting in the other semifinals with the winners and losers meeting on the final day.

“We will open up the year with a tournament on (Nov. 19 and 21) around the Ole Miss football games that involves Tulane, Louisiana Lafayette and Louisiana Tech,” said Brady. “This tournament is keeping in line with trying to bring in some of the best Louisiana schools each year and we feel this tournament should be an exciting event for our fans and a great way to open our season”

LSU is already slated for two national telecasts as LSU’s game at Kentucky Jan. 22 will be televised by CBS and the Tigers will appear on ESPN’s Super Tuesday on Feb. 22 against Alabama. The complete schedule of Jefferson Pilot Sports, SEC-TV (Fox Sports) and Cox Sports Television will be released in the weeks to come.